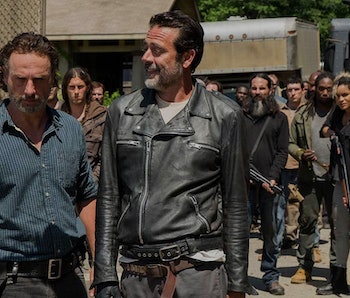 Rick and Negan’s bloody war could result in an unlikely alliance on The Walking Dead. That is, it could if the AMC show follows the comics series of the same name closely enough.

The latest issue of The Walking Dead comics, #164, written by Robert Kirkman and published by Image Comics, saw Negan saving Rick’s life, pulling an injured Rick through a door at the last minute before walkers could get a hold of him.

Negan’s been a very present character in the comics since Issue #100 — 64 issues ago — and he and Rick have never had anything close to a sunny relationship. But it seems Negan might have come to respect — and maybe even like — Rick since they first met. Y’know, back when Negan smashed Glenn’s head in in front of his family with a baseball bat.

AMC’s The Walking Dead, which often pulls content straight from its source comics, is way behind the comic series’ timeline — it also tends to embellish, lengthen, and add or subtract characters as it sees fit. But emotional, character-building moments from the comics tend to get their due process on the show, and Negan saving Rick’s life and admitting that they’re kinda-sorta the same person a lot of the time is a big deal.

Negan informs Rick that while everybody else tends to panic in stressful, walker-filled situations, the both of them are calm, focused, and looking at all the angles.

“I’m just saying — we’re alike, you and me,” Negan says. “We really should get along so much better.”

Rick assures Negan that the possibility for friendship between them is long gone.

The way things are going on AMC’s The Walking Dead, there’s a good chance Negan will bite the dust sooner rather than later. His bloody sacrifice and humiliation of Rick killed the show’s ratings, and there’s a good chance the writers would rather get rid of him and move on to the group’s next challenge. But, if there’s a chance for a weird understanding between the two, then it could result in the oddest plot twist yet.