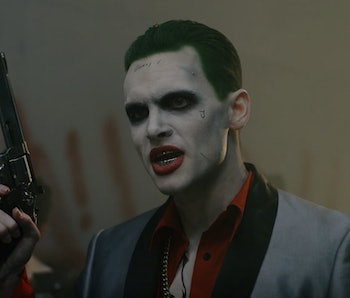 The film begins after Ledger’s Joker takes a certain associate of Leto’s Joker hostage. When the Leto Joker comes to rescue the captive, the two Jokers face off in a duel, complete with guns, explosives, and a pencil. The fight gets heated, and there’s a pretty surprising twist at the end.

It’s kind of like a mash-up of cinema Joker’s greatest hits, both Jokers quote dialogue from their respective films while adopting plenty of their mannerisms. The actor playing Ledger’s Joker nails the animal hitch in his step, while the actor playing Leto’s Joker ups the gangster feel of the Suicide Squad vision of the Joker, which is actually kind of a marked improvement over Leto’s performance.

The film team at ismahawk — who have made other superhero fan films like The Flash vs Quicksilver and Green Arrow vs Hawkeye — set out to envision what a showdown between the two most recent film versions of Joker would look like, and were largely successful, especially with the actors who do a pretty good job at capturing the feel of both Jokers. However, there were apparently some complications getting the production off the ground in the first place.

According to The Hollywood Reporter, ismahawk had to convince actor Noel Scheffli to even agree to audition for the role of Heath Ledger’s Joker. Citing a need to respect the memory of the late actor, Scheffli eventually agreed to a phone audition where he performed the infamous scene from Christopher Nolan’s film where Ledger’s Joker tortures a Batman impersonator.

Ultimately, the fan film’s director Hisanni Johnson wanted to create a film that fans who might have been left down with the recent slate of DC films might connect to. As a fan of the DC Extended Universe, Johnson hopes he paid fair tribute to them and expresses that maybe he could work for DC sometime in the future.