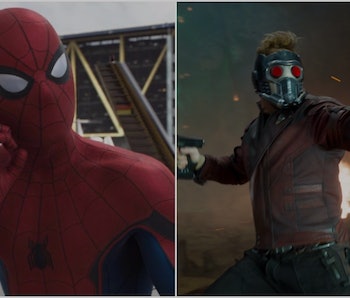 2017 is shaping up to be a stellar year for superhero movies. From DC’s Justice League and FOX’s Logan, to Marvel’s Guardians of the Galaxy Vol. 2, there’s plenty of films to be excited for, though it begs the question, “which films are people most excited for?” A recent data report reveals that the most talked about superhero film in 2017 by a wide margin is actually Spider-Man: Homecoming, which is dominating social media chatter by double digits.

The data crunchers at Brandwatch published several graphs which tracked the social media “buzz” surrounding each upcoming superhero film in 2017, using data from the period between November 1st, 2016 to January 11th, 2017.

By tracking the amount of mentions for each superhero film coming out in 2017, filtering out mentions of prequels (so there would be no cross-contamination), and tinkering searches so that each social media mention is specifically about an upcoming movie, the data shows that Spider-Man: Homecoming led the pack with 188,759 mentions, practically double that of Guardians of the Galaxy Vol. 2, the second place superhero film.

Lastly, the social media search was refined so that mentions of trailers and teasers were excluded. To nobody’s surprise, Spider-Man: Homecoming continued its stranglehold over nerds everywhere, maintaining a 41 percent share of the social media mentions, even after the search was filtered.

It seems that comic book fans can’t get enough of the friendly neighborhood Spider-Man, considering how dominant the character is in social media activity. As one of Marvel’s most popular superheroes — and a character audience members got a surprisingly thorough look at during Civil War — it’s no surprise that both fans of comic books and Marvel films are looking forward to the new Peter Parker lead his own adventure.