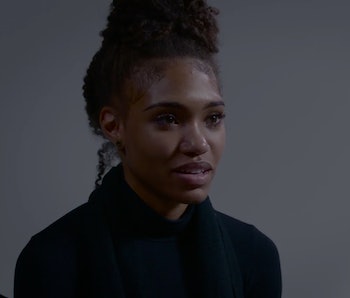 To celebrate Valentine’s Day, Condé Nast’s video storytelling platform The Scene shared the story of Kourtney and Leonard. The two lovers at one point had a flourishing relationship that came spiraling down because he cheated on her. Over the next couple of days, Kourtney became known as #HurtBae, a moniker fit for the young woman considering that she had to sit in a chair hearing all about her ex-boyfriend’s crappy antics before eventually breaking into tears. Now ~ The Internet ~ has become fascinated with the video, spurring an avalanche of memes and rallying behind #HurtBae.

The almost seven-minute video is a bit of a commitment to watch, outlining how the two met and eventually started dating. It moves a bit faster when Leonard starts listing off all the awful things he did behind Hurt Bae’s back. Think of it as an episode of Maury or Jerry Springer, but without a paternity test reveal or chairs being thrown, just melodramatic music in the background and a soft gray backdrop.

There were several moments that the internet particularly latched onto, including when Hurt Bae asks how many other girls Leonard had sex with and he says, “I can’t say.” There’s also the point in the video when Leonard talks about one situation when he had another girl in his room and told Kourtney to leave who went back to her room and “just cried the whole night.”

Since the video started making the rounds on social media, the two were identified as @RealCreoleKourt and @leonardlongii on Twitter. She’s apparently been receiving a lot of attention, even people trying to send her money on PayPal that she has denied. Meanwhile, people have been dragging Leonard for his past behavior.

The outrageousness of the entire sit-down confrontation gave denizens of Twitter an excellent amount of material to work with and oh boy did they have thoughts (and memes). Plenty of people had ideas of how they would’ve reacted if they were in Hurt Bae’s seat.

Some people would have gotten a little more … violent.

Many people started pointing out how much of a fuccboi Leonard was.

Some others had more complicated feelings about the whole situation, especially with how the two kept on talking about how they were best friends throughout the whole thing and still wanted to be in contact with one another.

Hurt Bae comes after a slew of other internet baes, including #SaltBae, the Turkish butcher mesmerizing people with his seasoning abilities and #PrisonBae, the ex-criminal whose stunning mugshot went viral and is now walking New York Fashion week runways.

Fuccboi 2017 (Leonard) and Hurt Bae now live in different states, but still talk regularly, according to the video’s ending.

More like this
Gaming
8.2.2022 5:27 PM
"Woke" GTA 6 is the best thing that could happen to the franchise
By Willa Rowe
Entertainment
8.11.2022 1:00 PM
Our Flag Means Death fans are redefining historical fiction
By Dais Johnston
Culture
8.13.2022 6:30 PM
These cheap home upgrades are skyrocketing in popularity because they look so freaking good
By Dena Ogden
Related Tags
Share: