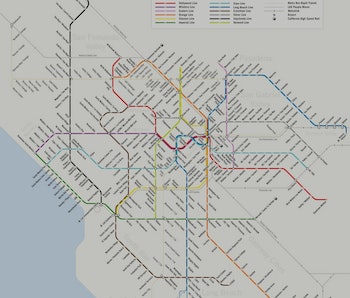 Los Angeles wants to host the 2024 Olympics, and it’s got some big infrastructure plans to convince judges it’s the right city to take on the job. Part of the city’s bid involves convincing organizers that the transportation system can handle the influx of visitors, a common issue considered in the decision-making process. Hosting the Olympics can act as the driving force to supercharge a city’s infrastructure, and it looks like L.A. will be no exception — because if this extremely detailed map of a futuristic expansion to its metro system comes true, the headache of L.A. traffic might finally wane. Elon Musk, who was inspired to start a tunnel digging company by the state of the city’s traffic, will be pleased.

Earlier this month, the state of California submitted a $100 billion wish list of projects for federal funding. President Trump has pledged to spend $1 trillion on infrastructure, and governor Jerry Brown has voiced his support for this plan by listing 51 “important and transformative” projects. One of these is an expansion to the Los Angeles metro that would see the purple and orange lines extended.

The Olympic bid committee is working to get these extensions done in time for the Olympics, as they would greatly increase access to the game sites. Extending the purple line to Westwood is a key component of the city’s bid.

The “orange line,” on the other hand, isn’t a standard metro line. It’s a bus rapid transit — a cheaper form of public transport that takes the benefits of a metro system (few stops, dedicated travel paths and stations) and applies them to buses. That makes extending at a later date cheaper than it would be otherwise.

Here is the current metro map:

And here is how the map would look by the year 2040, designed by Nick Andert, which assumes the Olympic projects, and many more, will be carried to completion:

This infrastructure boost is typical for Olympic cities. When London hosted the 2012 Olympics, the city expanded the Docklands Light Railway, London Overground, and even built a £25 million ($31 million) cable car spanning the River Thames. Similarly, Athens built the Proastiakos in time for the 2004 games, a new rail system that linked the airport to the local towns.

Los Angeles is competing with Budapest and Paris to win the chance to host the 2024 games. The host city will be elected in a special ceremony in September. At that point, it will probably become clearer how the next few years are going to look for L.A.’s metro extensions.

More like this
Innovation
23 hours ago
A single color is reason enough to buy a Jaguar XF
By Jordan Golson
Innovation
7.2.2022 6:00 PM
Are self-driving cars safe? The tipping point rests on a psychological illusion
By Jean-François Bonnefon and The Reader
Innovation
7.1.2022 10:00 AM
Robots are ready to get touchy-feely
By Sarah Wells
Share: