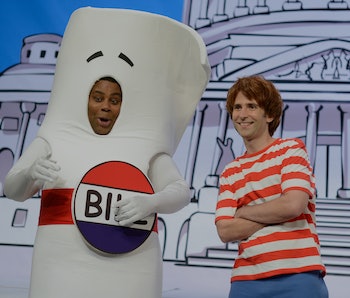 Did anyone actually pay attention in their high school government class? Sure, you can hum “How a Bill Becomes a Law” tune from Schoolhouse Rock, but what do you know beyond that? Let some experts drudge up some of those memories and explain what the hell’s going on in the world.

The law is, well, complicated. If the law were written in layman’s terms, maybe more people would find it palatable. It’s not, but wouldn’t that be great? It doesn’t have to be complicated; you just have to find the right people to explain it to you in words that are a little more relatable.

So, in honor of trying to figure out what’s going on in the world and how it affects everyone, here are four of the best podcasts to help the everyday person figure out the judicial system. After all: “I’m just a bill. Yes, I’m only a bill. And I’m sitting here on Capitol Hill” will only get you so far.

Legal blogger and attorney Denise Howell is joined by co-hosts J. Michael Keyes and Emory Roane to talk about issues in tech law, including patents, copyrights, and more. If you’re ever wondering why Disney and Taylor Swift keep suing everyone for copyright infringement, turn here. It focuses mostly on tech, but a lot of this stuff applies broadly.

Host Dahlia Lithwick takes a deep dive into the highest law of the land: the Supreme Court. Focusing on the nine (or, right now, eight) Supreme Court justices who interpret the law for the rest of the country and several of the lower courts, Lithwick attempts to make the law make sense.

Life of the Law is a bi-weekly podcast featuring a team of investigative journalists, audio producers, editors, scholars, and supporters in various cities across the U.S. who work to create stories and have hot-topic conversations about the law in America.

This is how you win every argument about legal issues and politics with your racist uncle. Legal expert Andrew Torrez and his comedic backup Thomas Smith tackle popular legal topics every week to give you the run-down and the best way to fight the good (or bad) fight on the topic of your choosing.