Trash Dove has flown straight into internet fame. The purple, head-flinging bird has taken over Facebook after going viral in Thailand, spurring plenty of hilarious remixes and memes. The garbage bird was created by illustrator and animator Syd Weiler back in the summer of 2016, though she didn’t expect for the dove to gain such notoriety. Now people everywhere are going gaga for the beaked beauty.

Last year when Weiler was traveling and sitting at a pond in Minneapolis, she saw a bunch of pigeons pecking around and an older man feeding the flock. That’s the moment that inspired the illustrator.

“They’re really funny birds; a little rainbow-y and shiny when the sun hits them. They’re almost pretty, but then they beg for crumbs,” Weiler tells Inverse. “They’re like doves, but they eat trash. Doves are classier pigeons.”

Then in September, Weiler streamed drawing Trash Dove using Adobe Photoshop and a tablet on her Twitch channel, where she regularly livestreams herself creating her artwork. 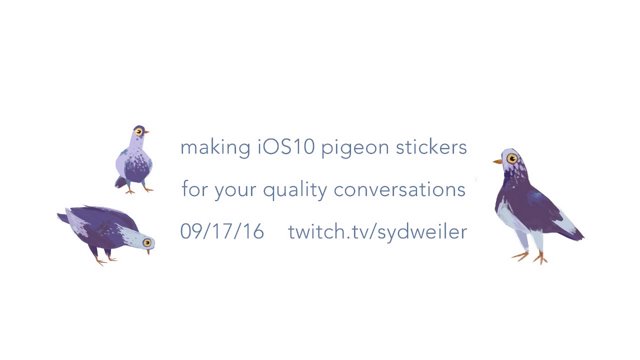 After that, she put it on the iOS store as an iPhone sticker pack, added it to Facebook, and licensed the bird. It wasn’t until last week that Trash Dove went viral. Weiler woke up on Thursday and realized that her work had taken off in Thailand, with people sending her articles and videos all in Thai.

English-language Thai news outlet Khaosod English has tried explaining the fascination with the bird, pointing out that the “word for bird, nok, is also used to describe someone hopelessly single or suffering from unrequited love.” Along with the adorableness of the illustrations, it’s the perfect storm for people on the internet to start a frenzy over.

“The cultural crossover is totally unanticipated, but it’s bringing a lot of joy,” Weiler says. “I’m all about the positive. I created these to make people smile, so whenever I see people sharing Trash Dove I get really excited. I’m glad people can appropriate that.”

To thank Thailand for the fanfare over her creation, Weiler posted a version of the bird with the Thai flag in one of its talons. When a commenter suggested that some people might be offended by the country icon being held in such a lowly manner due to cultural differences, Weiler swiftly whipped up another version with the flag in the purple animal’s beak. It was an “honest mistake,” and she didn’t mean to disrespect anyone.

Over the past couple of days, Trash Dove has gotten its time in the American spotlight. Available on Facebook as a sticker, there’s one bird for practically very emotion and situation. It’s also particularly fond of the typical pigeon diet, including bread and junk food. Trash Dove has even started to consume Facebook comment threads.

And of course, a slew of fan art and memes have also been created with the garbage-hungry flyer.

An iconic Bernie Sanders moment was remixed with Trash Dove.

Classical Art Memes took a stab at it.

Trash Dove has been turned into a human through the power of art.

Some dedicated fans have even turned themselves into Trash Dove.

Weiler, who’s also an Adobe Creative Resident, has also started on other sticker packs, including a rambunctious raccoon. Meanwhile, though, Trash Dove will continue to take over the internet one head bang at a time.