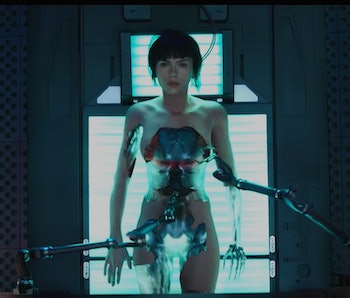 The Japanese cyberpunk Ghost in the Shell franchise — which includes films, television shows, manga, novels, and video games — has been around since 1989, but it’s just now hitting the big screen in a live-action format. The movie, controversially starring Scarlett Johansson, is about a counter-cyberterrorist organization in future Japan. As it looks to be drawing many of its action scenes from the source material, the best approach might be to enter with fresh eyes and watch the upcoming film before plumbing its back-catalog.

But whether you decide to dive in before or after seeing the film, if your Ghost in the Shell curiosity is piqued, there’s an overwhelming amount of material out there. Here’s a guide to the best order to approach it in.

The best place to start is with Mamoru Oshii’s original 1995 Ghost in the Shell anime film. You can find it on places like iTunes or Amazon.

Stand Alone Complex is the Ghost in the Shell anime television series. It’s tonally different from the movie and, as its name suggests, watching the film beforehand is not crucial. The series has the following order:

Ghost in the Shell: Arise is a prequel OVA series that stands apart from both the film and the television show. However, you should watch one or both first to have a solid foundation of this world. It’s a series that consists of four 50-minute episodes with the following order: Border: 1 Ghost Pain, Border: 2 Ghost Whispers, Border: 3 Ghost Tears, and Border: 4 Ghost Stands Alone. It’s available on YouTube and Amazon.

The original Ghost in the Shell manga consists of three volumes written and illustrated by creator Masamune Shirow. Their order is Ghost in the Shell, Ghost in the Shell 2: Man-Machine Interface and Ghost in the Shell 1.5: Human-Error Processor. You can find them at your local comic and graphic novel retailer or on Amazon. The movie and show will make sense if you watch it without reading them, so their place in the franchise’s order is up to your discretion.