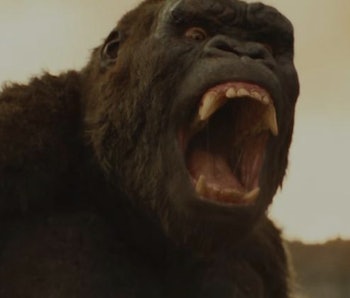 While the army heads on a mission to Skull Island to drop bombs and do other military grunt work, Monarch operative William Randa (John Goodman) is there for more scientific purposes. We know Kong: Skull Island is all about showcasing the king of the apes in all his glory, but it seems as though the top secret government agency called Monarch, first introduced in 2014’s Godzilla, is in the movie to gather as much information about monsters as they possibly can.

If you remember, these were the guys trying to figure out what the M.U.T.O.s were in Godzilla, and the 1970s-set Skull Island shows the agency in an earlier form doing exactly the same thing with other beasts.

Late last year the fictional agency’s discoverskullisland.com website began teasing out cryptic puzzles for fans to figure out, which led to the first reveal of Kong himself in faux film reel footage with “Monarch Eyes Only” text scrawled across the screen.

Now, the official Skull Island Twitter account revealed similar faux government footage featuring another monster heavily featured in the trailers called the “skullcrawler.” Considering this guy is labelled as a “destroyer,” the scientists stuck on Skull Island best watch their back.

The overall Skull Island recon mission from Monarch seems to be meant to classify what the transmission calls “hypervores,” which sounds like the perfect scientific-sounding synonym to monsters. The real question is, what other hypervores are waiting to be discovered on Skull Island?

And if you’re jonesing for some more monster footage, but this time in French, scope out the newly release French trailer for Skull Island below.