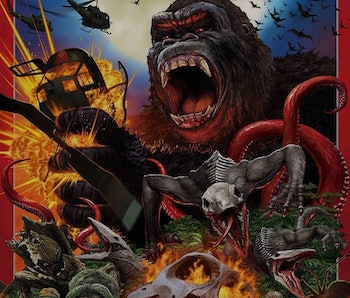 The new Japanese poster for Kong: Skull Island was just released, and it isn’t just any regular one-sheet. This gloriously illustrated piece of art shows off just how many monstrous adversaries Kong and the human explorers, led by Brie Larson and Tom Hiddleston, will face off against. The poster also gives off some serious original Japanese Godzilla poster vibes.

Specifically, this Japanese Kong poster recalls the 1968 film Destroy All Monsters. In that film, by original Godzilla director Ishirō Honda, the big green lizard has to battle a bunch of gigantic monsters unleashed from a place called Monster Island. Kong doesn’t have other iconic creatures to battle —like King Ghidorah, Rodan, or Mothra — just yet in Skull Island. But this poster leans heavily on the bigger established monster universe that the 2014 Godzilla reboot introduced. There’s those bipedal skeleton lizards, enormous wildebeest animals, and an unseen tentacled octopus of some kind. In short, it’s awesome.

Check out the old poster for Destroy All Monsters, too:

The upcoming Kong: Skull Island is shaping up to be the fun adventure blockbuster reboot of King Kong that Peter Jackson’s 2005 version wasn’t. The new 1970s-set film sees a group of explorers going to the secluded titular island to help conduct military experiments, but they get more than they bargained for. Disaster obviously ensues, and they soon realize the real reason they were sent there was for the shady monster research organization called Monarch — represented by John Goodman’s character Bill Randa — to prove the existence of hulking creatures.

But Kong doesn’t take too kindly to people disrupting the pecking order of the island, and he has to regulate like the king he is. Hopefully, this eventually involves him fighting Godzilla and the murderer’s row of iconic monsters from the original films.

More like this
Entertainment
6.19.2022 11:30 AM
You need to watch the best monster thriller of the '90s before it leaves HBO Max next week
By Mónica Marie Zorrilla
Culture
21 hours ago
8 sensational sci-fi shows and movies coming to HBO Max in July 2022
By Robin Bea
Culture
6.21.2022 4:00 AM
6 amazing sci-fi shows and movies leaving Netflix in June 2022
By Robin Bea
Related Tags
Share: