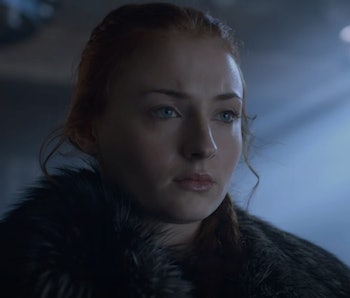 Although seemingly any one in Game of Thrones could be murdered at any time, it looks like Sansa Stark will survive whatever Westeros throws at her in Season 7.

In a red carpet interview unrelated to Game of Thrones, Sophie Turner made an offhand comment about her shooting schedule, revealing Sansa’s fate. Although she might have thought the comment went unnoticed, the North Remembers.

“We’re about to start shooting the next X-Men,” she said. “We’ve just finished shooting Season 7 of Thrones, and I’ve got a couple of movies to do before X-Men starts. And then we go on to Season 8.”

That nonchalant statement confirms that Sansa Stark will be among those who survive Season 7. Season 6 left her in a precarious position, putting the fractured North back together with her half-brother (but actual cousin) Jon Snow. To complicate her allegiance to Jon, Petyr Baelish came clean about his desire to sit on the Iron Throne with Sansa as his Queen. Although Sansa rebuked him, she owes Baelish for bringing the Vale as reinforcements at the Battle of the Bastards. And while Jon is still a bit of a soft-handed ruler, Sansa has no qualms about inflicting cruelty upon their enemies when it’s called for. That could spell tension moving forward, tension some fans have already dubbed Starkbowl.

Further, she shared an inscrutable look with Baelish as the Northern bannermen hailed Jon as, “King of the North!” As set reports from Season 7 place Jon at Dragonstone, Sansa will likely rule the North alone in his absence. All manner of terrible things happens to those who rule the North, but at least Turner has confirmed that Sansa will live to see the eighth and final season.