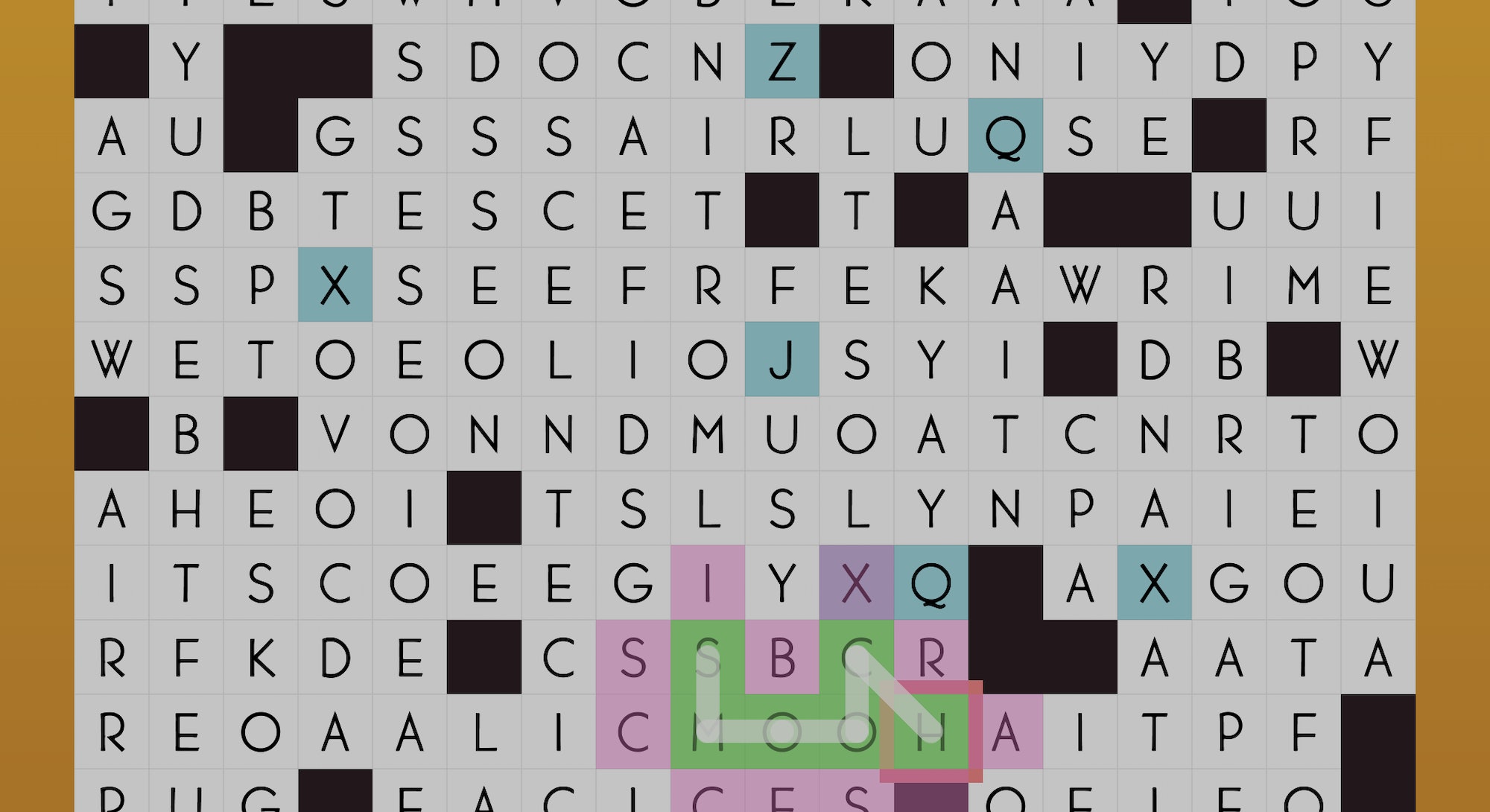 Zach Gage wasn’t expecting SpellTower, his minimalist indie word game, to take off on the App Store in 2012, settling firmly into the top ten after it’s release. Yet it did, and in doing so, it effectively launched his career as a video game developer, which is still going strong some five years later.

SpellTower is a video game twist on traditional crossword puzzles. Players are presented with a board filled to the brim with letters. The goal is to spell out words — simply slide your finger across the board to connect the letters. You can swipe across, down, or diagonally either forwards or backwards to form words. It’s simple, but the skillful design and satisfying variety of gameplay modes has made this game an App Store classic.

SpellTower just recently received a massive new update, complete with a new word list straight from Merriam-Webster. We sat down to talk to Gage about SpellTower and the mobile game design process.

How do you balance the elegant style of SpellTower with the logistical mechanics of creating games? Are these elements ever at conflict with one another or does it sort of happen naturally?

When I approach game design, there’s usually two parts of my approach: The first part is trying to convey the actual, enjoyable game itself. So when I design games, the way they work is I sort of fiddle around with systems until I find something that I like. But then when I show that to other people, they don’t find their way to the same part of it that I’m enjoying. The first part of the game design is “How do I get a person who’s playing this to the place that I’m enjoying?” And if I can get them there, then I know that the game kind of has legs and is going to be something that’s interesting.

And so, once I’ve tried to get them there, that’s when the visual end comes in. A lot of times, my games aren’t designed on the computer initially. A lot of the time, I’ll do something with cards, or board game pieces, or something like that. So the visual design part doesn’t come in until I actually get to the computer prototype part. And when I get there, I kind of just follow the rules of graphic design that I learned in communication design in college.

I follow this thing called “three reads,” which if you’re ever designing a poster, any designer will tell you. The idea is, you have a first read, which is the main thing that you want someone to see, like the name of the band. The second read is the information that they actually need, like the time of the concert. And the third read is the information that they only see if they need it, so that might be like small little copy about copyright information.

With something like SpellTower, the first read is going to be the board, and I want to make sure that people can understand all of that information. Then the second read is going to be your statistics and the word you’ve selected and what the high score is, all of that. And then third read is going to be the little bits that are talking about if a tile has length requirements. There’s a whole bit in the design that’s just, “How do I make sure that everybody’s eyes are looking at the right part?” And honestly, that part is a lot more complicated than picking the colors and stuff like that. That’s all of the mechanical part of the design interaction.

For SpellTower, I really wanted to give the sense that it was like a crossword puzzle, but digital. That was the big impetus for the game. So I wanted the design to be elegant, but I also wanted it to be sort of like pop in the way that video games could be pop, and so that’s why I used a really old school, elegant font. It doesn’t have serifs, but it’s shaped in a not blocky way. That’s why I picked that font: because I wanted it to be like a new, modern thing. And then I picked the bright, popping colors because I wanted to say, “You know what, though? Even though this is an elegant thing, it’s also a video game.” And that’s also where the sound design comes from. It’s all very pop-y.

The game’s multiplayer reportedly gave you a bit of trouble. How did you eventually find a path for online multiplayer in SpellTower?

I was working on having SpellTower in its entirety rewritten in a different language, and so there were just a lot of weird starts. I think the multiplayer issue was a microcosm of the sorts of issues that pop up when you’re trying to work with larger teams and other people. When I wrote SpellTower, it was just me, and it was my first hit game, and so I had never really worked with other people or tried to do any contracting out before. Basically, my whole career has happened in the last five years since SpellTower. I did a lot of games before SpellTower, but I think broadly in terms of people knowing me, SpellTower was the beginning of the very public part of my career.

It’s sort of a historical document of my career because at this point I’m at a spot where I know how to work with contractors, I know how to work on teams, and I know when I need to do management with people. I know what to do. When I started SpellTower, I didn’t know all of that. If I were to do SpellTower again today, if I were to do a big update, I’m sure it wouldn’t take five years. [laughs] But that’s what you get when you’re an indie and you’re learning as you go.

Do you feel that the climate with mobile design and the App Store has changed since SpellTower was first released?

It changes every couple of months, to be honest. That’s one of the things that I like about the App Store; it keeps you on your toes. In some ways that’s sort of scary, but in other ways it really rewards people who stay on their toes. Being on my toes is something that I enjoy, so I don’t mind at all that the system under the surface keeps changing.

Obviously the ecosystem has changed a ton. When I first released SpellTower, it was a bit of a weird place where you could either make $5,000 or half a million dollars on the App Store, and that was it. There were so few people that if you reached a wide audience, you were reaching a gigantic audience. But if you didn’t reach a wide audience, you were reaching basically nobody.

What’s happened now on the App Store is you can really make anywhere between $1,000 and $500,000 or more on the App Store. It’s much more of a sliding scale, which from the outside seems scary, because you don’t see quite so many articles about indies going in and making a million dollars and being super rich and very happy.

But the reality is I would much rather be able to count on making $50,000 to $100,000 on a game than being worried that a game might make $5,000. The App Store has really calmed down a lot and is supported a lot more. It’s kind of opened up in some ways. Not everybody is making a million dollars, but everybody is making a little bit more money than they were before on average, at least in terms of games that are doing well, which is really exciting to see.

I actually think the biggest change — or at least the one I’m most excited about — is that as a society, people are way more interested in games. And that’s really opened up a lot of channels for talking about games and having games be a part of people’s lives that haven’t really been possible before.

That’s a really big new trend that’s happening, and I think games are really powerful in terms of getting people to think and be creative. So it’s really exciting, both as an app developer to be able to try to push press in that direction, but also as a human being to see this stuff happening around us.

Do you have any plans for more mobile games?

For sure. Part of this partnership with Merriam-Webster that I did for SpellTower is another word game that I’m pretty excited about. I’ve been working on it for a while. When I did SpellTower, it was because I really didn’t like word games. I’m into exploring genres that I don’t like, because they’re totally new to me. I’ve ignored them my entire life, so SpellTower was really interesting for me to do. It was an opening gateway for me into word games and into actually becoming someone who enjoys word games.

This new word game is the first word game I’ve done since SpellTower, and it’s very much about a different area of words. SpellTower was really sort of about word searches. This is about something that’s a little different. There’s still a word search-y element, but it’s a very different part of words and explores a different kind of structure in language. I don’t want to say too much more about it, but I’m pretty excited and I hope that everybody really likes it when it comes out later this year.

I have quite a number of mobile games in the works. I have a billiards game that hopefully will also be coming out this year. I have about 5,000 more prototypes [laughs] that will get done at some point. I’m also working on an Apple Watch game, which I will hopefully also get out this year, but we’ll see. There’s a lot to do on all of these things.