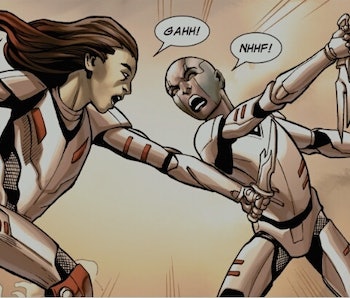 We already know that Nebula, the blue baldie from the first Guardians of the Galaxy movie, will become one of the good guys at some point during the upcoming Vol 2. The actress who plays her, Karen Gillan, says Nebula won’t just join the team, but she’ll also reconnect with her sister, Gamora, by talking about just how much their “dad,” Thanos, messed them up.

Gillan spoke with Mashable during a recent set visit, and the Dr. Who actress explained that the movie will reveal Gamora and Nebula’s full backstory. Thanos is not going to appear in Vol 2, according to Marvel, but Gillan says he’ll still be a big part of the sisters’ plot in the sequel.

She explained that Nebula and Thanos have “an abusive relationship, where you know you should be away from that person, but you for some reason are drawn to them.” Whereas in the first movie she followed Thanos’s orders to get Gamora, this time around she’s not out for blood.

“She’s also on a mission to find Gamora and rectify a few things there as well, and we’re going to find out a lot about their backstory and learn a lot about Thanos’ parenting skills and maybe how dysfunctional the entire thing is,” Gillan said.

“We learn a lot about their backstory actually and what happened to these two girls growing up and actually how awful it was for them and how it’s ruined their relationship and they’re sort of going to freely talk about it, which has never happened between these two people,” she continued, explaining that there won’t be any actual flashbacks. The two sisters will just talk … and fight.

“That’s how they communicate: through fighting. So there’s a lot of that as well,” Gillan said.

Gillan, who remarked that she was surprised to see Nebula’s role in the franchise grow this much, also spilled that Nebula is “unimpressed by Rocket.” That’ll be a fun interaction, no doubt.

Guardians of the Galaxy Vol 2 comes out on May 5.