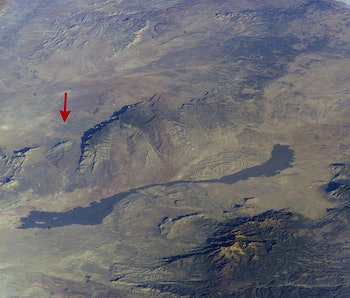 When the first plutonium bomb was detonated in New Mexico in 1945, it left behind green-tinged radioactive glass called trinitite. Analyzing the levels of zinc and other volatile elements contained in that trinitite has now revealed a very similar chemical reaction to what we believe took place when the Earth collided with another planet 4.5 billion years ago and hurled into space the debris that ultimately coalesced in our orbit as the moon, according to new research published Wednesday in the journal Science Advances.

The trinitite sheet created in the aftermath of Trinity nuclear test extends more than 1,000 feet. A team of scientists from the Scripps Institution of Oceanography at the University of California, San Diego studied samples collected from various points along the blast radius — between 30 and 800 feet from the center. They found that unlike the outer samples, the trinitite gathered closest to that center had been stripped of its “volatile elements” which vaporize under high pressure, like zinc. Turns out, the zinc that did remain had been chemically altered.

“The results show that evaporation at high temperatures, similar to those at the beginning of planet formation, leads to the loss of volatile elements and to enrichment in heavy isotopes in the leftover materials from the event,” Scripps geoscientist and lead author James Day said in a press release. “This has been conventional wisdom, but now we have experimental evidence to show it.”

What does this have to do with the moon? What happened to the bomb-site zinc is basically what happened when the moon was formed. The extreme heat from the nuclear reaction in New Mexico formed the trinitite sheet, and the same chemical reaction can occur in space, so long as the temperature and pressure are sufficiently high.

“We used what was a history-changing event to scientific benefit, obtaining new and important scientific information from an event over 70 years ago that changed human history forever,” Day said.

A collision between Earth and a planet roughly the size of Mars has long been our best working theory for how the moon was formed. Recent evidence showed that the moon also might have been a bunch of lil moons before gravity eventually compacted it into the moon we know today. The Trinity bomb itself was fueled by the Hanford Site, which you might remember as part of the Manhattan Project.