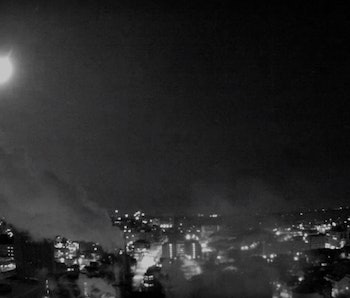 Folks in the Midwestern United States who happened to be out and about in the wee hours of Monday morning were treated to a spectacular light show when a fairly large meteor careened over Lake Michigan before exploding in a dazzling flash. Luckily, several police dashcams and a fortuitously placed camera on the roof of the University of Wisconsin’s Atmospheric, Oceanic & Space Sciences Building captured the event for posterity.

The National Weather Service first detected the meteor — which experts say was probably the size of a minivan when it was floating out in space — at 1:29 a.m., Monday. It traveled between Sheboygan and Manitowoc, Wisconsin, before exploding in a green fireball that Astronomy reports was visible as far south as Kentucky and as far east as the edge of New York state.

Nobody was injured by the meteor, and experts believe most of the fragment of the space rock ended up in Lake Michigan after it went kablooey.

Police dashcams captured the meteor as it streaked across the sky before turning everything a blinding white.

National Weather Service meteorologist Jeff Last told NPR that the green color was likely a result of “the interaction of the material in the meteor and the friction, the heat that is a result of the friction as it moves very, very rapidly through the atmosphere.”

More like this
Science
8.10.2022 3:00 PM
Asteroids may have carved Earth's landforms as we know them — study
By Doris Elín Urrutia
Science
8.5.2022 2:30 PM
A tiny meteorite holds interstellar material from a distant supernova
By Kiona Smith
Science
22 hours ago
South Korea just launched a rocket to orbit the Moon, a first for the country
By Nancy Atkinson and Universe Today
Related Tags
Share: