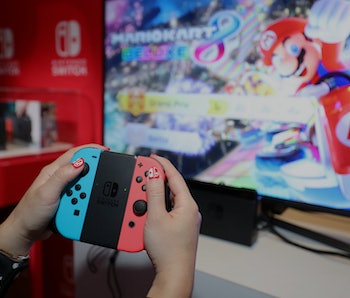 My first thought upon actually seeing the Nintendo Switch hardware up close and personal at PAX South 2017 in San Antonio was this: “My hands are going to absolutely engulf those tiny, tiny controllers.” I wasn’t wrong. They did. But it was also ones of those experiences where the tiny inconveniences sort of melted away to leave me with an overall positive feeling. The Switch feels like a compromise; something more in line with the traditional while also wacky and different.

I managed to get some time with The Legend of Zelda: Breath of the Wild while at the convention, and it’s that experience that now makes up the bulk of my observations about the Switch. Admittedly, it was under 30 minutes, but the feel of a controller in your hands is something that either just works or it doesn’t. The ergonomics (henceforth referred to as “handfeel” for short) can be appreciated from a distance, but it just doesn’t compare to holding it in your hand.

And the Switch feels good. The plastic is nice on the hand and doesn’t feel cheap, but it keeps the whole thing relatively light. If anything, going back and forth between handhelds and TV-connected device seems … not great. My advisor had some trouble with adding and removing the Joy-Cons, and it might have been the early morning catching up with me, but stooping over to play the handheld version of Zelda on the convention floor wasn’t exactly pleasant. When he asked if I wanted to move back to TV mode, I immediately and emphatically said yes.

My only real complaint would be this: The left Joy-Con controller constantly felt sluggish. I’d be rolling around as Link, trying to maneuver in such a way to avoid attacks or just generally get a feel for how the game played, and he’d stutter and generally not respond to my commands. When I brought it up to my assigned handler, he mentioned that it was possible that the sheer number of Switch consoles could be causing some kind of interference. It’s also possible the batteries were already running out, though I was only the third or fourth person to play on that specific console that day.

If the actual issue at hand is the former, where there were just too many Nintendo Switch consoles in the vicinity, that doesn’t bode particularly well for esports that may or may not live on it. Other than that, it’s hard to imagine a scenario where this many units would be in the same place other than a convention — and obviously that’s an outlier.

Overall, I’m hesitant to pass judgment on the Switch given my small amount of time with it. I’m interested, to say the least, but that’s mostly thanks to my all-encompassing philosophy when it comes to games: I’d rather a game be an ambitious, imperfect mess with interesting ideas than a technically perfect, lifeless shell of a thing. And if there’s one thing Nintendo’s good at, it’s producing ambitious, imperfect messes.

More like this
Gaming
5.21.2022 12:00 PM
Everthing we know so far about future Nintendo Switch Sports updates
By Jess Reyes
Gaming
5.23.2022 1:30 PM
Nintendo Switch OLED made me fall back in love with handheld gaming
By Tom Regan
Gaming
12 hours ago
Everything you need to know about Temtem's launch on PS5
By Willa Rowe
Related Tags
Share: