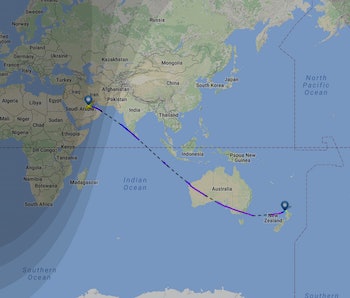 The world’s longest non-stop commercial flight landed in Auckland, New Zealand, on Monday, 16 hours and 23 minutes after taking off from Doha, Qatar. The journey of Qatar Airways flight QR920, which spanned a staggering 9,032 miles and ten time zones, was hailed as a new milestone for both global aviation and New Zealand as a whole.

The increased distance comes from the fact that airlines don’t fly exactly straight to their destination. They may choose to avoid flying over certain countries, for example. In the case of the Air India flight, the airline flies a route over the Pacific Ocean with lots of tailwinds, which helps to save on fuel.

Qatar Airways is using a Boeing 777-200LR, an aircraft launched in 2006 that was designed specifically for long-range flights. The aircraft was showered with water cannons upon arrival, a tradition for new airline routes.

Passengers on the inaugural flight were treated with commemorative cupcakes, and those sitting in business class received a special Kiwi Rose Fizz mocktail. The airline also produced menu cards inspired by Maori art.

The flight is also expected to aid New Zealand industries. The aircraft can transport 116 metric tons (127.8 U.S. tons) of belly-hold cargo. Trade minister Todd McClay is predicting a $36 million boost to the country’s economy through the increased freight capacity provided by the regularly-scheduled flight.

Check out the Qatar Airways route below:

Unfortunately, Qatar Airways’ record may not last too long. Singapore Airlines plans to launch a New York-Singapore route in 2018 that would span over 9,500 miles.

More like this
Science
6.28.2022 8:15 PM
Virgin Orbit targets June launch window for U.S. Space Force collaboration
By Doris Elín Urrutia
Innovation
7.2.2022 6:00 PM
Are self-driving cars safe? The tipping point rests on a psychological illusion
By Jean-François Bonnefon and The Reader
Innovation
7.1.2022 10:00 AM
Robots are ready to get touchy-feely
By Sarah Wells
Share: