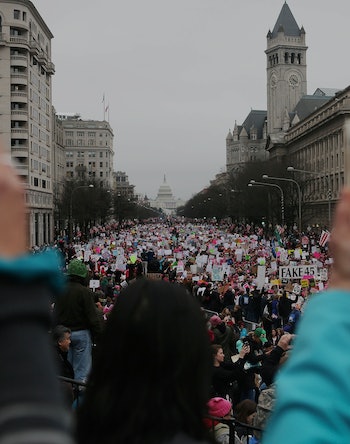 This intensely partisan election season saw more armchair activists than ever, with Twitter and Facebook providing easy outlets for aggrieved citizens to make their cases to friends and family. But, as Democrats found out in November, tossing digital notes into closed ecosystems does little to sway voters or lawmakers. Physical demonstrations and phone calls make a bigger difference.

Bella Pori knows this from experience. She remembers sitting in senate offices on Capitol Hill a few years back, sifting through angry messages from fired-up constituents. And though she worked for Senators Kirsten Gillibrand (D-NY) and Tom Udall (D-NM), both reliable progressives, both felt the heat.

“The right has done such a good job of creating an angry and loud base. I’ve seen the mail that comes in from groups that I don’t agree with, and I was like, ‘Why don’t we do this? Why don’t we have the same level of outreach?’” Pori says. “We did notice those emails and it forced them to put out statements and sometimes changed votes.”

After Donald Trump’s improbable election victory in November, she decided that it was time to build an infrastructure for progressive pressure and protest. And so Pori, who now works as an aide to a New York State Assemblyman, teamed up with two friends to create CallThemIn.com, a site that allows people to quickly search for their senators’ office numbers and provides short scripts about three core issues: protecting Obamacare, preventing tax cuts for the rich, and blocking Republican appointments. When Pori launched Call Them In, it became one of a growing number of tools created to assist shaken members of the left who are determined to resist the Trump administration agenda.

Pori co-founded the site with a PR strategist and a full-time software engineer, creating the sort of new team that has become common in the months after the election. While protests from the left are nothing new, the collaboration with developers marks an important new chapter.

The tech industry’s corporate leadership PACs gave more to Republican candidates than Democratic candidates this year, and CEOs have for the most part worked to play nice with the Trump administration (pushback on the immigration order not withstanding).

At the same time, programming is no longer a niche skill, and developers and engineers now come from all walks of life. It is an increasingly diverse field, leading to an undercurrent of attitudinal change.

Nick O’Neill, who works in the Bay Area as a mobile developer spent the last few weeks of election season in Las Vegas with his wife Rebecca Kaufman, volunteering for Hillary Clinton’s presidential campaign. A Trump victory didn’t seem all that likely, but they didn’t want to regret their complacency in the case of a major upset. And though they were able to avoid feelings of personal guilt in the aftermath of Trump’s victory, O’Neill and Kaufman still haven’t slept easy; instead, they’ve spent nights and weekends working on 5Calls.org, another call tool that has helped swamp congressional phone lines over the last few weeks.

O’Neill and Kaufman tapped their network of friends and colleagues to build out an extensive site in just a few months. The almost instant explosion of executive actions and legislative moves since Trump’s January 20th inauguration — from the first steps toward Obamacare repeal to cabinet nominees to the so-called “Muslim ban” — the site’s purpose clarified potential importance. In the two weeks since 5Calls launched, activists have used it to make well over 360,000 calls to their representatives, voicing opinions on everything from a border wall to the nomination of Neil Gorsuch to the Supreme Court.

“Some friends put together the design, some others put together a logo, some other volunteers have helped out along the way with some of the coding,” O’Neill explained. “It’s definitely a volunteer effort, and that continues today, because we’re all open-source, and we’re really trying to get people involved.”

Programmers who want to help out can access the site’s code on GitHub, a collaborative backend platform for engineers. Developers simply offer up their expertise on a certain function or grab a ticket on an issue that has yet to be fixed and get to work on coding a solution. The backend process makes 5Calls a living, breathing example of how people in the tech industry are currently agitating for political change or caution.

“I would describe most of tech people’s attitude toward politics as a little bit aloof,” O’Neill said. “They say, ‘Oh we can solve this with an app.’ They don’t really understand the problem, or they don’t bother talking to anyone about what problem they’re actually solving. But I think people, in general, have always had this left-leaning bias in tech, just because of where we’re primarily located and the evidence-based reasoning that we employ on a regular basis. So what you’re seeing now is more and more people who are trying to find a way to get involved.”

The site Tech-Forward.com is a testament to that newfound activism. It is a clearinghouse for groups that are aimed specifically at uniting tech workers in pursuit of progressive change, and a list of organizations that need technical expertise to help accomplish their own goals.

DataRefuge, for example, is an emergency operation aimed to preserve the data on climate change and other scientific areas of concern that the Trump administration has ordered to be closed to the public. Progressive Coders Network, meanwhile, is aimed at both building open-source tools for activists, as well as contributing to a running list of established campaigns that require back-end know-how. And it’s a two-way street, as the programming community stands to gain from the discoveries made by these activist app-makers.

“One of the challenges that motivated us to build things out for ourselves is the general difficulty in dynamically fetching and maintaining up-to-date information about senators from a number of different sources,” Yatrik Solaki, who heads up the tech side of Call Them In, told Inverse. “As our front-end engineer is also a data scientist by day, we’re definitely hoping to be able to contribute our learnings there back to the open source community.”

Laura Moser runs the group Daily Action, which has taken the outreach one step further: She sends out texts to her rapidly expanding list of volunteers, guaranteeing even more engagement. Launched in mid-December with the backing of the activism group Creative Majority, which her husband runs, the daily text prompt now goes out to over 200,000 people. And since the inauguration, the list has been adding about 10,000 subscribers a day, Moser says. Right now, they’re achieving a 10% completion rate, meaning that through Daily Action alone, over 20,000 calls are being made per day.

Moser, who does not work in politics, sends out a single action each morning, offering subscribers phone numbers to call and a Facebook-hosted fact sheet about the day’s issue. Most go to Congress, but she does focus her fire elsewhere from time to time; on Wednesday, Moser prompted her activists to call the Customs and Border Patrol offices at each of the country’s international airports, to ask how many people they have detained under Trump’s controversial executive order.

“Of course, they can’t tell people that,” Moser said. “But that night at 7 p.m., Customs released a statement with exactly the info we were asking for.”

For the most part, all of these organizations are operating outside the control of the Democratic Party. There are groups such as Run for Something and Swing Left, which work to explicitly elect Democrats, but by and large the agenda is more progressive than purely partisan. As Senate Democrats publicly struggle to develop a coherent strategy, many of the calls being made through the new sites are meant to pressure them into firm opposition to Trump’s agenda.

The circumvention of the traditional Democratic apparatus represents a new chapter in the battle for the future of the party, which was last waged in the primary between Clinton and Vermont Senator Bernie Sanders. Creative Majority did the digital work for Sanders’s underdog campaign, and Moser suggests the spirit of that bid is infusing both her daily texts and plans for the future. She’s looking at seemingly safe senators who are not putting up much of a resistance to Trump, and envisioning moving to backing outsider candidates in future elections.

“I was just talking to my main researcher about Senator Mark Warner,” she said, noting that the centrist Democrat had voted to approve each of Trump’s cabinet nominees thus far. “Virginia is technically a purple state, but all the population growth is in [the more liberal] northern Virginia. There’s going to be a lot of primarying of people. I definitely support having real candidates from the left. Because Republicans put up these complete right wing extremists, so why do we have these moderates?”

For Pori and Call Them In, the hope is to push the Republican Party to a more moderate position through sheer volume of calls, and pick off senators on individual issues.

“There are a lot of senators who are Republicans but would support the right progressive legislation,” she said. “We wanted to frame it less as one party and more supporting legislation that would bring America forward.”

Some groups are avoiding electoral politics and legislation altogether. TogetherList is a rapidly evolving database that connects donors and volunteers with progressive charities and organizations that target individual issues and do work on the ground level.

“We are really deliberate about connecting people to volunteer organizations,” Raihan Anwar, one of the group’s three co-founders, said. “You either donate or volunteer; we don’t really want slacktivism, social media kind of stuff. Its not enough to click a like. You either pull out your wallet or get out there with your feet.”

Started the day after the election, TogetherList is continuously adding both national and local organizations to their list of promoted charities; while the ACLU is on the list, so are the Boston Area Rape Crisis Center and LGBT Books to Prisoners. Raihan did the original programming on Python, but the site is now open source; as volunteers pour in, the plan is to develop customization and search functions that will promote the intersectionality that is so crucial to progressive causes. The common thread here is that they choose groups that help people most likely to be hurt during the Trump years.

“Say you’re really into immigrants’ rights, but also into women’s rights, and you want to find organizations who help women of color who are immigrating, you can do that with TogetherList,” Anwar said.

Partisan or not, the success of these campaigns will ultimately come down to how motivated its vast number of participants remain. Moser doesn’t think that’ll be a problem.

“I was worried when I started it, people would get tired of making phone calls, but people haven’t, they’re angry,” she said. “Every day there’s a new assault on our liberties, and people are paying attention.”