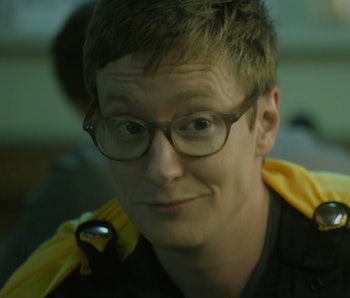 Not every superpower is worthy of a Cinematic Universe. Eugene and Genesis are two unlucky ducks with superpowers that are less than extraordinary, working with local law enforcement officials to take down every day bad guys in Special Forces.

Co-writers Phil Bucci and Marcus Perry kicked off a Kickstarter for Special Forces in 2014, originally looking to aim the premise for a TV series with the tagline: “Super crimes call for super cops, but not all powers are created equal.” Now, in its stead, a short film is premiering on February 6 on Bucci’s website after having already made a festival circuit.

In the short film, Eugene has the ability to heat things a couple of degrees while Genesis can manifest her emotions as holograms of light (bubbling hearts, a middle finger, etc.). They have, as Genesis puts it in the official trailer, “won the nickel slots” of superpowers.

Eugene is bumbling, optimistic, and wears a yellow cape everywhere he goes. Genesis is his opposite: sarcastic, dressed in black and purple, rolling her eyes at everything Eugene says. But they’re a team through and through, and catching bad guys — whether they’re bank robbers instead of world-destroying aliens — is still an important job.

The short film’s similarity to Joss Whedon’s Dr. Horrible’s Sing-Along Blog is undeniable, its whole-hearted humor taking aim at not just the world around the characters but the characters themselves. They’re ridiculous, and they know it.

Be on the lookout for Bucci and Perry’s Special Forces, available to watch online February 6.