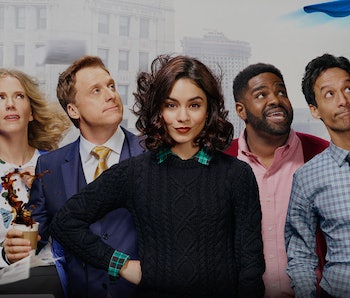 The workplace sitcom has been given a heroic twist. In the new NBC comedy Powerless, ordinary citizens inhabiting the DC Universe put up with large-scale superhero battles comparable to a Tuesday traffic jam but with severely more fatalities. The free market has stepped in, profiting from people’s instinctual desire to survive a hazardous world. Among the entrepreneurs is Bruce Wayne, the same vengeful billionaire who fights crime as Gotham City’s crusader, Batman — but only we know that. Wayne has mastered vertical integration in a comic book world, but does it rewrite what it means to be a superhero?

Fundamentally, Powerless is about the failure of goodness to overcome a bad system. As good battles evil, the gaping flaw is the vulnerability of humans that the heroes have sworn to protect. The climax of Zack Snyder’s Man of Steel, which fueled Batman and Superman’s no holds barred match in Dawn of Justice, cranked this to a thousand as it exploited the trauma of urban terrorism. Powerless is less sinister, painting supervillainy as a nuisance that can be solved with capitalist-driven invention.

There’s a lot of demand, and Wayne is intent to supply. Like many of NBC’s best sitcoms, Powerless is a workplace comedy in the spirit of Cheers, The Office, and its network contemporary SuperStore. But the mundanity of life in Powerless is deeply intertwined with the unrealism of the outside world, creating a juxtaposition that rewrites decades of how superhero fans understood the genre. Is Bruce Wayne actually exploiting superheroism? Or is creating a steady, dependable revenue stream ensuring he can continue to stop the Riddler and Penguin from tearing Gotham down? For now, Bruce might be too busy to ever show up at the Charm City branch of Wayne Enterprises, leaving his motivations up for interpretation.

In its pilot episode, Emily Locke (Vanessa Hudgens) begins her first day leading the R&D department of Wayne Security, which aims to “give back the power to the powerless,” according to a narrating Adam West in a commercial promo. The episode follows a rather rudimentary narrative for workplace pilots: To keep the lights on at Wayne Security, a breakthrough new idea must be ready by the end of the day. That idea comes in the shape of a “watch detector,” which alerts the wearer to the Joker’s presence by sensing his natural musk in the vicinity. It’s a gadget Batman himself could use, if he hasn’t already invented it, enabling a feedback loop between Wayne and his employees.

But that was one episode. There’s a whole season left to go — and presumably more after that — and the natural dramatic tension in corporate culture, fictional or not, is to perform at peak performance all the time. In real corporate settings, innovation is hardly a bad thing, but in Powerless, innovation threatens superheroes to plateau. If average men are capable of innovating and productizing their way out of villainy, does it threaten superheroes to care less about their own collateral damage? The best Superman writers, like John Byrne or Mark Waid, know that the Man of Steel lives in glass as long as he’s on Earth. But if people can solve their way out of danger, would Superman care less about his own damage? Whether or not it does, corporate capitalism in the world of Powerless could be its own sort of evil, but at least it’ll be funny.