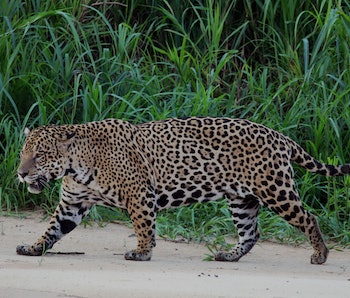 The great wall that President Donald Trump plans to build across the border with Mexico won’t ebb the flow of people between the two countries — but it will stop the flow of wildlife.

And that’s a huge problem. The border region is noted for its biodiversity, but the species that call it home are also threatened by the increase of human activity. An impenetrable wall through the territories of these organisms could push animals that call this place home to extinction.

“Over the long term, movement — of all organisms, really — can be essential for maintaining species in the persistence of disturbances and environmental change,” Jesse Lasky, a biologist with Pennsylvania State University, tells Inverse. “If dispersal is no longer able to happen, or if it’s greatly reduced because of barriers that separate many populations of a species, then that can be something that would limit their ability to repopulate areas, and ultimately lead to extinction, perhaps.”

By the U.S. Fish and Wildlife Service’s count, 111 species that are listed as threatened or endangered would potentially be impacted by a border wall. That list includes plants and animals, including terrestrial species, aquatic life, birds, and bats. Lasky’s own research identified more than 50 mammals, reptiles, and amphibians that would be imperiled by reduced freedom of movement across the border. The list includes the jaguarundi — a small wildcat that is listed as threatened by both the U.S. and Mexican governments.

Putting an artificial boundary through the territory of an animal can have enormous consequences for its survival. “Some animals need to move fairly large distances on a day-to-day basis to find what they need to live, whether it be food — grazing animals like bighorn sheep — or hunting things like a jaguar or a mountain lion,��� says Lasky. “They travel large distances, especially in these places where it’s fairly dry and resources are scarce. To find water they often have to travel large distances, or to find mates.”

Even the smaller creatures that don’t need so much space in the day to day will be hurt by a barrier through their habitat. This happens in a few ways. Species can survive local extinction events by repopulating areas that have been hit with disease or some other catastrophe. A wall makes this harder. Cutting off small populations from the rest also hurts genetic diversity and can lead to the sort of issues associated with too much inbreeding. Finally, species need the ability to move around in response to changing environmental conditions. This is particularly important in the context of climate change, which is already pushing the range of many animals northward as temperatures rise. “You can imagine that those organisms could be unable to reach their preferred conditions and perhaps go extinct,” says Lasky.

A border wall will all but certainly end the presence of jaguars in the United States. Today, only one lone male, nicknamed El Jefe, is known to hang out on the north side of the border. The wall is bad news not only for El Jefe’s future prospects to find a mate and pass on his genes, but to the entire ecosystem he reigns over. Apex predators are, perhaps ironically, good for biodiversity.

We’ll hear less about the rats, the mice, the reptiles, and the amphibians that are driven to the point of extinction by this enormous interruption in their range. But they matter, too — and would be a huge loss to the southwestern ecosystem.

More like this
Science
6.16.2022 3:58 PM
8 rare species thought to be extinct that actually aren't
By Jennifer Walter
Science
6.22.2022 11:00 AM
Watch: These bats can memorize your phone ringtone, and it might help them hunt
By Jennifer Walter
Science
6.27.2022 11:00 AM
Letting your cat go outside could spread “life-threatening” parasites — new research
By Amy Wilson, Scott Wilson and The Conversation
Related Tags
Share: