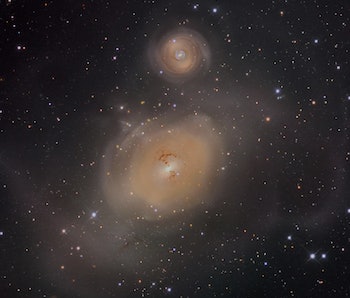 Scientists have reason to believe the size of a vast swirling elliptical galaxy, named NGC 1316, may be the result of a massive collision that occurred a few billion years ago.

The image, taken by the Cerro Tololo Inter-American Observatory and processed by amateur astronomer Steve Mazlin, shows how the individual galaxies NGC 1316 and NGC 1317 may have come together. When the two formations got too close to one another, it was an epic battle. A highly magnetized force began to tug and pull at the galaxies, forcing them to meet. But, NGC 1316 was so much larger that it basically swallowed NGC 1317 whole.

It is also believed that NGC 1316 has absorbed a handful of other smaller galaxies. This is evident in current data from NASA’s Hubble Space Telescope, which shows a very complex system of dusty trails intertwined within NGC 1316 — unusual for most elliptical galaxies — which are the stellar remains of other galaxies which were once independent.

NGC 1316, also known as Fornax A after the constellation Fornax, is the fourth brightest radio galaxy that astronomers have discovered. This means it emits a strong radio frequency, believed to be caused by the combined activity from the smaller galaxies that merged with NGC 1316. Think of it as the fitful screams of the trapped galaxies inside.

Swirling about like an angry ninja star and eating whatever comes near its path, NGC 1316 has become a kind of monster in Fornax. Luckily, its 75 million light years away from Earth, so we don’t have to worry about duking it out with this raging bully anytime soon.