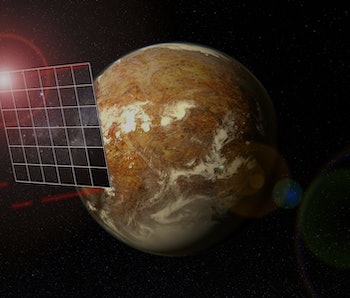 What do Stephen Hawking, Mark Zuckerberg, and Russian billionaire Yuri Milner have in common? Oh yeah, they want to look for aliens in Alpha Centauri. The trio’s Breakthrough Starshot initiative plans to one day launch a gaggle of gram-sized nanocrafts out to Earth’s closest neighboring star system (4.37 light-years away) fast enough so they make it in about 20 years’ time to look for signs of extraterrestrial life and habitable worlds.

Among the extravagantly long list of obstacles the project will need to overcome is the issue of braking. Launching a spacecraft out into space at a fifth the speed of light is one thing. But unless you find a way to make those Starshot spacecraft slow down enough as they approach the star system and any potential planets in the region, all they will do is zip by extraordinarily fast and leave us with a black-and-white blurred photo of some space rocks. Braking is essential for making any space mission work — especially interstellar ones.

Well, some researchers fro the Max Planck Institute in Munich may have stumbled on a “ground-braking” solution (sorry, I had to). A new study published in The Astrophysical Journal Letters illustrates how one might be able to use radiation and gravity from Alpha Centauri’s stars to decelerate the nanocraft and allow them to collect better, more valuable data during their exploration of the system. This would allow us to potentially reroute the spacecraft to study more areas at once, and even use the craft to study nearby Proxima b — which is the closest potentially habitable world to Earth.

The current design for the Starshot nanocraft calls for the use of lightsails to propel them forward. The probes would be (ludicrously) launched into space through high-powered lasers that drive the sail forward using photons. It makes little sense, but if it works, the spacecraft would not require any chemical propulsion, and could accelerate to nearly 37,350 miles per second.

The new paper calls for replacing the insane laser array with a much bigger “photon” sail that’s propelled using the sun’s radiation, and then folds in once it reaches a maximum speed. It’s much slower — we go from a 20-year time frame to get to Alpha Centauri, to a staggering 95 years — but the sail could use the radiation from other stars to slow down considerably.

Once it’s finally made it to Alpha Centauri, the new probe could use stellar gravity to help slingshot itself around the system, for continued data collection. In fact, the new plan effectively outlines a potential route for allowing the probe to move through the planetary regions that encompass both Alpha Centauri A and B, and nearby Proxima Centauri. The whole thing would take a little under 150 years.

Is it worth putting in that much more time for such a mission? Depends on how you look at it. If the overall goal is simply to show interstellar travel is possible, then the current design suffices. If, however, we’re really more interested in seeing whether aliens and habitable worlds really do exist around Alpha Centauri, then the extra time would guarantee much better data.

“Our new mission concept could yield a high scientific return, but only the grandchildren of our grandchildren would receive it,” said lead study author René Heller in a news release. “Starshot, on the other hand, works on a timescale of decades and could be realized in one generation. So we might have identified a long-term, follow-up concept for Starshot.

There’s a slew of other technical concerns to consider, but the new plans certainly ensure a better likelihood we can find something valuable when we finally make it to Alpha Centauri.