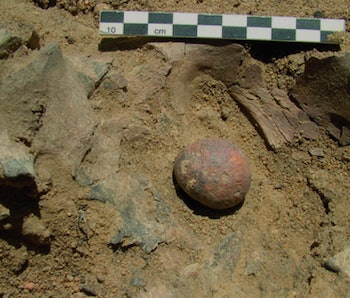 To pass a prostate stone is to squeeze a literal rock, which can grow to be the size of a bean, through the urethra and out of the tip of a penis. It is painful, and it is common in men. It’s also nothing new: Scientists just found evidence of a 12,000-year-old man who died with prostate rocks the size of walnuts. Unfortunately, the discovery suggests that there’s no escaping them.

The skeleton was found face down in a prehistoric cemetery in central Sudan, a few miles south of Khartoum, the researchers write in PLoS One. Positioned next to his skeleton were three ovoid rocks. Were they ritual offerings? Sentimental keepsakes? Nope — eventually the researchers surmised, on the basis of their odd positioning, that they represented “a pathological condition,” as they note in the article. But which?

They could have been bladder stones, kidney stones, or gallstones; the body makes lots of stones when it accumulates calcium, all of them painful. But the Italian and British researchers sliced up one of the “intriguing” rocks and studied its structure and composition, concluding that this sad man’s stones were from his prostate.

The prostate is a little bag at the bottom of a man’s bladder, pressed up against his anus, and its sole job is to secrete fluid that makes up a part of semen. In some men over 40, half of those between 51 and 60, and up to 90 percent of guys over 80, the prostate gets enlarged in a way that is mostly benign, but the swelling sometimes prevents the prostate’s juices from getting out. Stuck in their bag, they sit and sometimes form calculi — prostate rocks — that then have to be surgically removed or very painfully excreted in a stream of pee.

The discovery of the 12,000 year-old prostate rocks — the oldest scientists have ever found — led the scientists to conclude that prostate lithiasis isn’t some painful consequence of modern living or eating habits. It’s a “disease which therefore can no longer be considered exclusive to the modern era, but which also affected prehistoric individuals, whose lifestyle and diet were significantly different to our own,” they write.