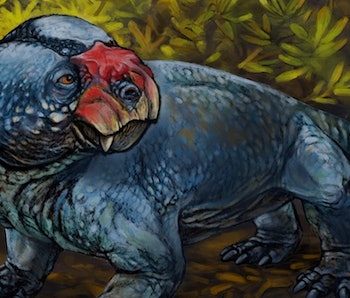 Around 260 million years ago, mammal-like reptiles called dicynodonts roamed the Earth. They appeared on the planet before the dinosaurs, and they’re believed to be more closely related to humans than any velociraptor. On Tuesday, paleontologists announced that they have identified a new member of the species — a large-tusked creature they’ve named Bulbasaurus phyloxyron.

The scientists say that the creature was named for its bulbous-shaped nose, not because they’re super big fans of the Pokémon Bulbasaur — although they say it’s all the better if a pop culture connection brings more attention to natural history.

“Regarding the name, it is common taxonomic practice to name new species after prominent features of the organism,” lead author Christian Kammerer, Ph.D., of the Museum für Naturkunde Berlin tells Inverse by e-mail. “In the current case, the genus Bulbasaurus (bulb lizard) refers to the bulbous nasal boss and the species phylloxyron (leaf razor) refers to the sharpened beak for slicing through the planet material it ate.”

“That said,” Kammerer adds coyly, “similarities between this species and certain other squat, tusked quadrupeds may not be entirely coincidental.”

Based on the description of the Bulbasaurus laid out in the open access journal PeerJ, their appearance wasn’t too dissimilar from the chubby pocket monster. Sure, the ancient dicynodonts couldn’t vine whip their opponents, but they did have a stocky body and were considered the most successful herbivores of their time.

The fossils of the now-identified Bulbasaurus were first discovered by Roger Smith, Ph.D., of South Africa’s Iziko Museum in the Karoo Basin of South Africa. This area is the richest source in the world to find fossils from Permian-period species such as the Bulbasaurus. The fossils originally were identified as another taxon of dicynodonts called Tropidostoma, but when Smith was joined by Kammerer they realized that something was off — the large size of their tusks.

“I immediately had doubts that they were Tropidostoma — the tusks were too large, the nasal bone was different, and the skull was too robust,” Kammerer says. “Following detailed study of these fossils and comparisons with all other dicynodonts, we were able to confidently argue that they represented a new species.”

The Bulbasaurus had a skull of only about 16 centimeters and were part of the oldest group of dicynodonts, called geikiids. Dicynodonts had front legs that pushed out sideways like a lizard’s but had back legs that were straight like a mammal’s. The name dicynodonts actually means “two dog teeth” — a reference to their tusks. They lived long before the dinosaurs, but it’s believed that the last survivors of them may have overlapped in time with early dinosaurs.

“Dicynodonts are difficult animals to describe because they are so alien from anything living today,” says Kammerer. “One thing is that is important to note, however, is that they are more closely related to mammals like you or I than to dinosaurs and other reptiles. They could be described as something of a ‘turtle-pig’, because they combined turtle-like beaks with pig-like bodies, and the only teeth they had were tusks.”

The Bulbasaurus also belongs in a grouping of animals called synapsids, which today include mammals and all animals closely related to mammals. This makes them, per the statement in the PLOS Paleo Community Blog, like our “great, great, great (etc.) grand cousins.”

Scientists are excited that the now-known existence of these stocky critters will help them fill in gaps of the fossil record. Before now, there has been a problem referred to as “ghost lineage” — paleontologists can reason that groups of organisms were alive at a specific time, but the fossils to back those claims up were missing.

Are there more Bulbasaurus fossils waiting around in museums, waiting to be correctly identified? Kammerer is pretty sure he won’t catch them all in museum collections — “I’ve looked through all of them carefully” — but there is a chance more will be found out in the field.

More like this
Science
Jan. 19, 2023
Dinosaur fossils complicate our understanding of how they reproduced
By Elana Spivack
Science
Jan. 22, 2023
Humans didn’t evolve to live in cold — our survival is a lesson in ingenuity
By The Conversation, Kyoko Yamaguchi and Laura Buck
Science
Jan. 22, 2023
Scientists have found a subtle way to hunt for life on exoplanets
By Evan Gough and Universe Today
Share: