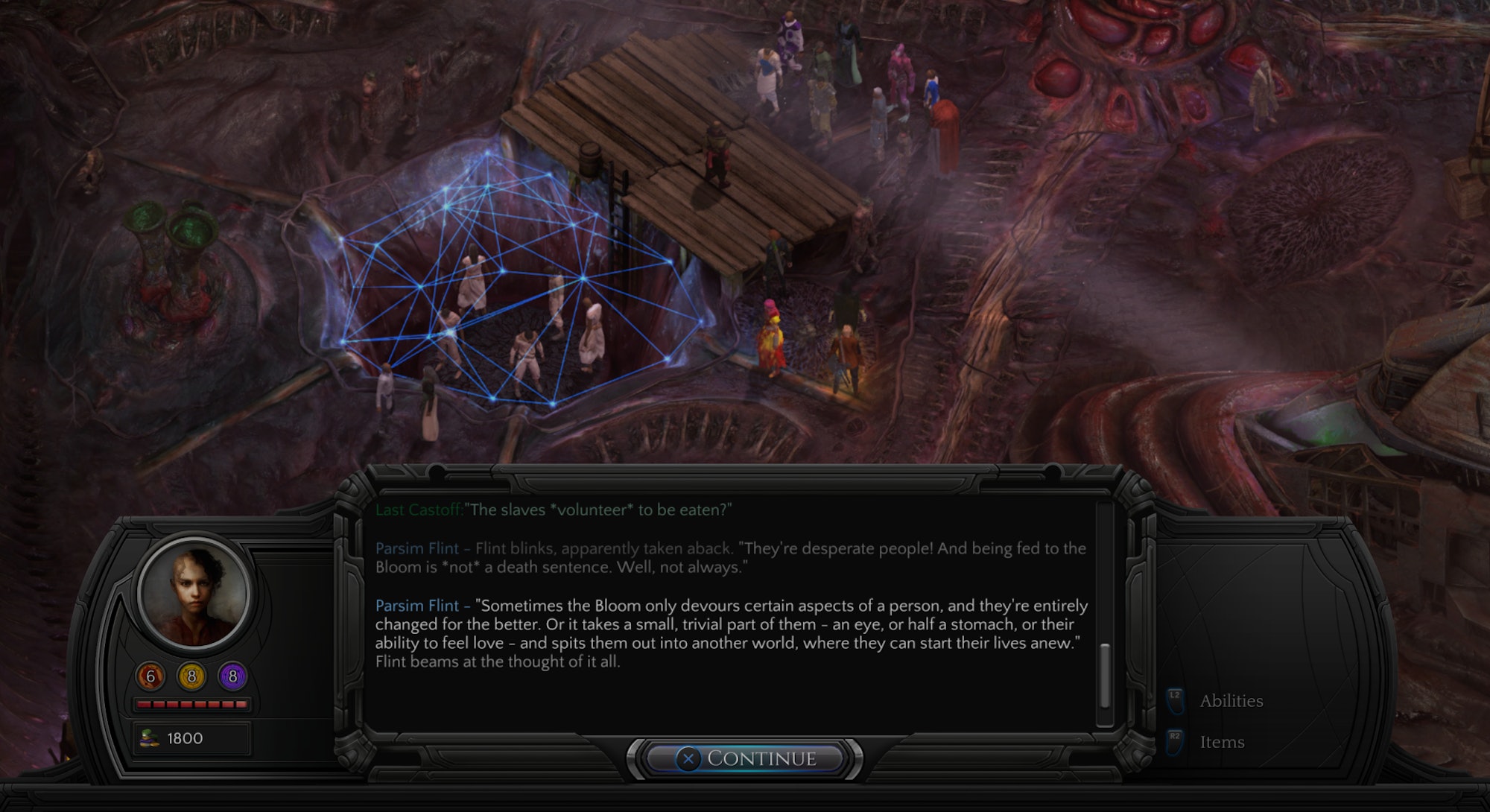 “For this type of game, you have to put your head in a different place,” inXile Entertainment CEO Brian Fargo told Inverse, of the company’s upcoming video game Torment: Tides of Numenera, the latest of its crowdfunded titles. “This is more words than the Bible; you’ve got to really put your head into it like you’re reading a great book.”

Kickstarter and other crowdfunding sites offer independent and established video game developers alike the opportunity to get their passion projects funded. This increasingly means developers no longer have to rely on just publisher support to get a game to the masses, which is increasingly difficult with the bottom line being a publisher’s immediate concern. Developers present their game to the public instead, living or dying based on how badly people want to play it before even having seen a finished product. A relatively uncommon practice, few companies succeed in crowdfunding a title once, let alone enough times to build a successful business model.

While most titles strike out, never even making it to a fully funded product, let alone a finished one, there are developers who’ve produced some truly exciting results for their backers — Harebrained Schemes with Shadowrun Returns and Obsidian Entertainment with Pillars of Eternity jump to mind — while slowly shifting what it means to be fans, developers, and investors. inXile Entertainment is one such developer who is not only experiencing repeated success, but seemingly building a business based solely on giving fans exactly what they want. Run by the former heads of Interplay Productions, Brian Fargo and Matthew Findley, the company’s recent games have sought to revisit past titles and genres, and reinvigorate them for the modern market.

Torment: Tides of Numenera comes on the heels of the success of Wasteland 2. The new game is a spiritual successor to the ‘90s hardcore CRPG Planescape: Torment. The company wanted to show that these styles of games can still have great success, and enlisted genre talent such as Fargo, Colin McComb, Monte Cook, Chris Avellone, and Brian Mitsoda to make it happen. During a special hands-on event in San Francisco, Fargo spoke about the future of crowdfunded games, being an independent developer, and what it’s like return to an old favorite.

“There’s always a lot of pressure, even though it’s a different dynamic,” the inXile CEO said about the process of working as an independent developer. “When you’re working for a publisher — which I’ve covered many times — you’re in this money struggle, whether they want you to go this way and force their will. Whereas the people funding it say ‘we trust you’ upfront, and it’s a different kind of pressure: We’re keeping an eye on you personally, and you better deliver this thing, which of course can hurt your reputation so the pressure is very high.”

The fans have a true voice on crowdfunded projects. Now that they are financed by their audience, Fargo elaborated, inXile’s entire perspective on development has changed with that dynamic.

“I remember when we were doing Wasteland 2, y’know it’s kinda funny, because gosh I’ve been in this business for 30 years, and [the backers] said, how do you know you’re gonna finish this game? What made it different in their minds was that I was using other people’s money. I’ve always compared this to running for political office, which is like they’re [the backers are] your constituents. All the pressure is there, but after we shipped Wasteland 2, the trust factor continued to go higher.”

Each of the four crowdfunded titles inXile Entertainment has produced so far has been a modernization of nostalgic PC games from the nineties. Many look to that time as the golden period for PC games — Half-Life, Starcraft, Baldur’s Gate, and Grim Fandango came out in one year alone — and there’s a general sense of rose-colored longing in several communities for those days to come back. Fargo went on to credit the fans for giving inXile the opportunity to produce their new titles without interference from publishers and financial stakeholders. Though publishers can provide a buffer between fans and developers, it also means they hold sway over the final product.

“The old Interplay days were great. We could make any kind of game we wanted to any way that we wanted to. And I wasn’t able to do that for almost a decade,” said Fargo about game development during the ‘90s. “It was very important, and only through crowdfunding was I able to do that again. I’ve been very fortunate that people gave me the shot to do it, and so thankfully we’re delivering. As far as Torment, it’s a little scary because it’s so revered. But gosh, I have so many of the original members of the game around me and available: Colin McComb, Chris Avellone, Monte Cook. This might be the only shot to actually make the game, and that’s why we went for it.”

Fargo noted that crowdfunding allowed them to experiment, “Creativity is not a straight line at all, so I think that people are starting to learn that there’s a process behind making a game that’s very difficult,” he said. “It’s fun to start a game, but it’s very difficult to finish it.”

Making Torment didn’t come without its struggles, most of which revolved around communicating with backers, which is ironic given the fact that they initially freed inXile from publisher interference.

“In some ways, we’re educating each other, right? On one level, I think people have this idea that these games sort of just magically appear perfectly organized and in sync, and there aren’t all the problems that we run into as developers … there’s always drama behind the scenes,” Fargo said. After years of developers working in the traditional games publishing model, it’s common for regular folks to have no idea exactly what goes on during game development. Watching the sausage get made is vastly different from eating it. Despite the fact that inXile Entertainment is beholden not to one publisher, but hundreds of individual people, Fargo says that for the most part they’re pleased with the response they’ve gotten from their financier fans as well as critics.

The rapid success of Wasteland 2’s crowdfunding campaign surprised the studio; had the response for that Kickstarter campaign been unenthusiastic and tepid, then Torment likely would have never been picked as their next project. But the developer doubled down when they decided to spend all that hard-earned goodwill on another title that was such a drastic departure from the first. Planescape: Torment is a big departure from Wasteland 2 given that it’s a surreal, fantasy-based role-playing game rather than a post-apocalyptic military one.

“What the writers and artists liked about Planescape so much was the ‘otherworldliness’ of it all,” explained Fargo. “It didn’t really fit into anything. It was part horror, part fantasy, part sci-fi in ways, so they had the creative constraints completely removed from them, and writing was at the core of what made it so great. And that was our goal, those were the tenants and the things we knew were important. We also knew that we needed to have combat, conflict, and risk. But it’s not necessarily the core loop of gameplay, it’s all through the exploration, conversation, puzzle solving, and crafting the story your way. For us, we wanted to make sure we have all those and have it in a slightly different package. Which is what we’ve done here, without feeling like it’s derivative or a full-on sequel. I feel that this will be better received for its originality.”

With the uptick in classic-style CRPG titles released in recent years, things are certainly looking up for the genre as well as more nostalgic jaunts through game worlds of the past in general. Going forward, Fargo still envisions crowdfunding to be a part of inXile Entertainment’s development strategy, but he recognizes that the landscape is changing.

“I think crowdfunding is changing because of the equity,” said Fargo. “I think it’s going to be a very interesting conversation when we ship a game, not only did you [the fan] like it, but you [the fan turned backer] made X percent return on your money and everyone made a profit. That really changes things, and it changes our ability to how much we want to do.”

“I like the interaction we have with the audience that comes with it. You’re able to vet a lot of things,” he continued, indicating that what fans are and are not interested in makes for valuable knowledge throughout the course of development. “I’d imagine if we did a crowdfunding campaign and nobody wanted it, well gosh, I guess I don’t want to spend millions of dollars making it. So with that reason, I’d like to still keep using it in the future.”

It’s clear that a whole lot of love and effort went into the creation of this game. But the team at inXile Entertainment aren’t resting on their laurels. With Bard’s Tale IV and Wasteland 3 up next, they’ve certainly got their work cut out for them, but Fargo is looking to the future more optimistic than ever. After positive feedback from the fans, and knowing they’ll be there at launch and beyond, inXile has as much trust in its fans as fans do in inXile.

“For me, I’ve always described this process as thinking back to the ‘90s where you make Fallout, ship it out, and keep your fingers crossed,” Fargo admits. “All we had was our QA department to give us feedback — it’s not as many people. They’re being paid to give us feedback, not that they weren’t being objective, but what the general public offered was a bit more harsh feedback after the game shipped. I couldn’t do anything about it. For this game, we put it out on early access months ago, and it’s leaps and bounds [from there]. When you see a large group of people reacting strongly to something, you have to listen to them.”