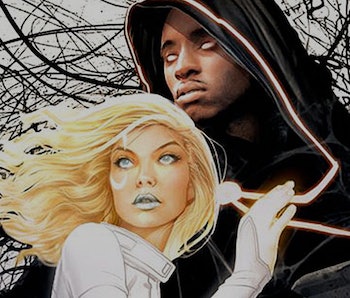 Cloak and Dagger have been one of the most beloved young superhero couples since they debuted in Marvel comics in 1983. Now, the TV series based on their comics has finally found its stars.

Marvel announced back in April 2016 that it was greenlighting a Cloak and Dagger TV series on Freeform, but neither writers nor a cast had been attached. Now, an official announcement has been made about who will be playing the titular Cloak (Tyrone Johnson) and Dagger (Tandy Bowen).

Olivia Holt, a Disney Channel child, is reported to be tackling the role of Tandy/Dagger, who has the ability to create daggers of light, purge people of addiction, and heal others. At her side will be Aubrey Joseph (The Night Of) as Tyrone/Cloak, who deals with a much darker and, often, more troubling set of powers: teleportation, intangibility, and a link to the Darkforce dimension that allows him to absorb all light.

Tandy is described in the series as: “Once a privileged little girl, Tandy Bowen watched as her family was destroyed by a disastrous storm that uprooted her life. Now in her late teens, an unexpected encounter with a boy named Tyrone sparks a life changing event.” Meanwhile, as Tandy’s polar opposite in both abilities and background, Tyrone is described as always wanting “nothing more than to prove he was fearless. But when everything he held close was taken away, life taught Tyrone to be afraid. Now older and more sheltered, Tyrone closes himself off. But when he meets a girl named Tandy his life changes forever.”

Holt and Joseph will be taking on Cloak and Dagger’s sweepingly romantic story at a time when superhero hype is very real. Cloak and Dagger had their own series for the first 11 issues before joining up with Doctor Strange and later bouncing into Spider-Man, Runaways, and X-Men comics.

So, not only does this series have the potential to be romantic and sexy AF, but it also has a truckload of lore and historical, in-universe references to be made. And that’s definitely something to look forward to.