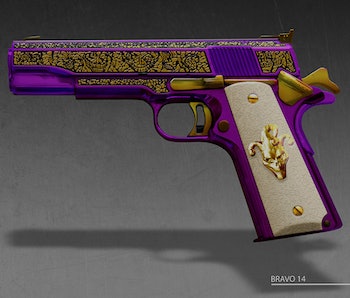 The Joker from Suicide Squad is a very trashy man which isn’t surprising considering he has the word “Damaged” tattooed onto his forehead. Now new concept art reveals just how deep his vanity runs, emblazening his weapons and gear with Joker designs that look like they’re from Hot Topic.

Despite all the Joker iterations on screen over the years, Suicide Squad’s Jared Leto Joker turned plenty of heads when the first image of him was released, and not necessarily in a good way. While the tattoos and purple Lamborghini clued fans into the kind of Jersey Shore reject look Leto’s Joker was going for, new concept art shows just how self-centered he actually is. His guns all feature Joker designs that run on a general theme of gaudy colors and blinged out Joker designs.

Take for instance this purple and gold gun, complete with a stylized Joker bling insignia and a shattered glass motif which includes outlines of Joker’s own face.

Leto’s Joker is also an expert at building a personal brand through his associates. What else explains Harley Quinn’s equally gaudy revolver which features a similar gold color scheme, Joker branded grip, and a barrel that alternates the words “Love” and “Hate”.

It explains a lot that the Joker would be in love with his personal brand, considering the amount of effort he puts into showing off his body art. While he appeared in tuxedos and other formal wear during his short screentime in Suicide Squad, nothing really captures Leto’s Joker quite like this shirtless variation of him wearing a tie around his neck.

It screams “I’m formal”, but also “I have ‘Hahahaha’ tattooed on my chest, get it?” Frankly, it’s not a great look past the age of 18, and it’s certainly not doing the Joker any favors.

The question really is whether or not the Joker wouldn’t be happier as a graphic designer than as a criminal. Clearly, he puts a ton of effort in crafting custom, Joker-brand weapons, and cars. His “look” is evidently very important to him.

Given the fact that he goes out of the way to make sure Harley and his henchmen follow his designs, Joker might want to consider transitioning to a career as a design consultant. Though he would probably make sure all of his clients adopt his Joker themed branding.