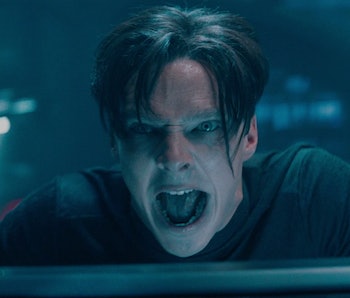 The wrath of Khan isn’t over yet. In fact, the legendary Star Trek baddie’s time (as portrayed by Benedict Cumberbatch) has only just begun. The members of the U.S.S. Enterprise and the Green Lantern Corps have their work cut out for them as CumberKhan has acquired a Red Power Ring.

The last time fans were treated to a Khan appearance was in J.J. Abrams’s 2013 Star Trek Into Darkness when he was played by Cumberbatch. Khan survived his run-in with the crew of the Enterprise (or maybe it was the other way around?) but was inevitably captured to save Captain Kirk’s life after being beaten half-to-death by Spock.

But that heart-pounding chase through the streets of a futuristic San Francisco wasn’t Khan’s last hurrah. Now, he’s back, teaming up with the Green Lantern Corp’s arch nemesis, Sinestro in IDW Entertainment and DC Comics’s Star Trek/Green Lantern #2.

Khan and his followers have broken out of an intergalactic jail, and Khan has gained control of a Red Lantern Power Ring: the appropriately-named, “ring of rage.”

A Red Lantern Ring — for those not so familiar with Green Lantern comics lore — is similar to a Green Lantern Ring, but instead of relying on willpower for its energy, it harnesses the wearer’s rage. Eventually, the power will consume the wearer, leaving them as a shell of their former self — nothing will remain but anger, pain, and a need for revenge and destruction. It’s fun stuff.

So, combining Khan’s legendary wrath with the power of the Red Lantern Ring is a recipe for disaster. Having Sinestro at his side will only make things worse for the crew of the Enterprise and the Lanterns when they inevitably take this duo on.

Star Trek/Green Lantern #2 is out now.