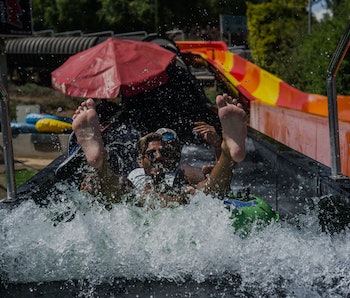 When a fourth-grade girl told President Barack Obama about her revolutionary idea for a new national waterslide interstate system, the former commander-in-chief responded, and the delightful letter he wrote recently blew up on Twitter.

Obama followed up with the visionary girl, Francesca, about her watery idea for interstate transport on August 6, 2014. His response marks Obama as the ultimate dad – a little corny, but charming and inspiring. However, the original letter from the little fourth-grade genius never made it to the web. Without it, we are left wondering exactly how she wanted to design her system of waterslides. Since Obama doesn’t make any suggestions in his response, we’ve gone ahead and made a few of our own.

Obama’s response itself refers to the railroad built by Abe Lincoln to connect the country, so we can assume that the idea is to connect the country in the best way possible, and isn’t a global transportation plan. Since he mentions speed limits, maybe these slides overlap and go multiple directions.

With these thoughts in mind, one idea is just to stick waterslides along the most efficient path to see the 50 major landmarks across the country. This would turn the best road trip ever into the most fun anyone has ever had on a family vacation while remaining soggy for days at a time, but also achieve our objectives. Randal Olsen, a data scientist at the University of Pennslyvania, designed this optimal map.

Or you could use the most efficient transit paths designed for potential hyperloop connections, and just replace the Hyperloop with giant tubes of water carrying people across the country. Of course, in this model, you lose the parts of the country that aren’t as heavily populated.

If you’re really trying to connect all of the country in one spectacular waterslide, you could use the America 2050 passenger transportation suggestion, which is designed to connect the entire country based on what it will look like in the future.

A major plus side to all of these maps is that you could reduce droughts near any major connection really easily. And imagine the fun to be had. We will have to wait and see if President Obama’s words will inspire this girl to take on Elon Musk and build something better than the Hyperloop.