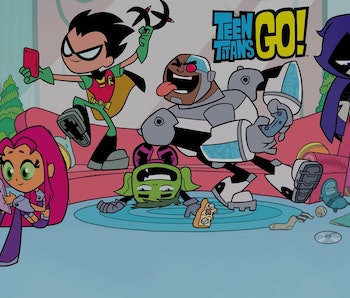 Cartoon Network is proving that their comedic DC series Teen Titans GO! is willing to go anywhere if it means it can provide a source of irreverent, superhero humor. Even if it means implying that Martian Manhunter’s name is actually the least subtle double entendre.

After the cancellation of the first Teen Titans series, fans lamented that the show’s successor, Teen Titans GO! didn’t feature the compelling personal narratives and drama of the first series. GO! did, however, bring to the table a willingness to lean 100 percent into the fact that the show is a purely comedic spinoff series.

A new clip from comicbook.com from the special two-part episode of Teen Titans GO!, appropriately titled “Two Parter: Part Two”, is a clear example of the kind of humor Teen Titans GO! specializes in, which is to say, a manic, kind of low-brow but grudgingly clever kind of humor. It’s funny and cheeky but maybe a little crass as well.

In a bid to save the Justice League, the Teen Titans basically become the Justice League. Raven becomes Wonder Woman, Starfire becomes The Flash, Cyborg becomes the Green Lantern, and Beast Boy becomes Martian Manhunter, an alien who hunts men.

That Martian Manhunter gay joke isn’t particularly subtle, but neither are the more geeky references, like the fact that Cyborg desperately wants to be a member of the Justice League. That’s funny because, in most of the recent Justice League comic book stories, as well as the upcoming Zack Snyder film, Cyborg is actually an original member of the team.

Still Teen Titans GO! is the young DC superhero animated show we have right now (at least until the next season of Young Justice arrives), so buckle in and enjoy what you have.