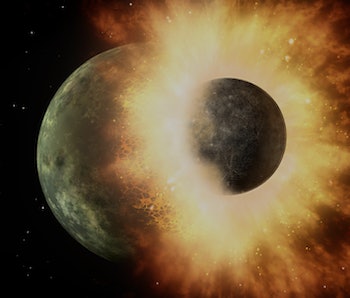 Earth may have been subjected to repeated collisions with rocky protoplanets early in its history, new research suggests.

William Bottke, a planetary scientist with the Southwest Research Institute in Colorado, suggests that collisions with comets and asteroids can only account for a part of this planet’s turbulent early life, and the full picture may have been a lot more complicated, according to reporting by Space.com.

Piecing back together the history of our solar system is no easy proposition. Geological processes here on Earth have wiped all traces of the planet as it was billions of years ago away. But there are other places that still hold clues — notably, Mars and the moon. Because those space rocks have been geologically quiet in the interim, they still bear scars from a violent past.

We do know that early solar system history was a lot more chaotic. The material orbiting the sun would have initially been very diffuse — only over time did it accumulate into planets, and it took longer still for those planets to clear the bulk of the space junk out of their orbital paths.

In one widely accepted though not uncontested version of this history, the rocky planets of the inner solar system experienced an uptick of collisions with other space rocks from about 4.1 to 3.8 billion years ago. This event is known as the Late Heavy Bombardment. The Nice model proposes that around this period the gas giant planets were migrating from positions closer to the sun out towards their current orbits, and on the way they blasted through asteroid belts and sent some of them shooting towards the smaller planets.

Bottke basically subscribes to this version of events, though he suggests it doesn’t tell the whole story. He proposes, based on new model analysis, that asteroid and comet impacts might only account for a small fraction of the visible craters on the moon and Mars, and that the rest might be accounted for by collisions with other planet-like accumulations of rocky mass.

Certainly these sorts of collisions were a feature of the early solar system. The moon, for example, was formed when proto-Earth collided with a Mars-sized planet, nearly vaporizing them both.

Space scientists are beginning to piece together the puzzle of how the solar system came to be as we know it today, which is part of the mystery of life on Earth itself. But the details are still hazy, and the questions enormous. But that won’t stop scientists from pursuing their curiosity to the edge of the solar system and beyond, one academic debate at a time.