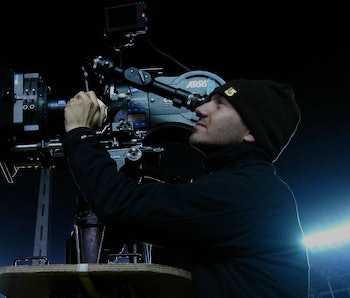 Amazon’s The Man in the High Castle imagines what the world would be like if the Axis powers won World War II. It’s Director of Photography Gonzalo Amat’s job to make it look like reality. Amat has been a key component in creating the retro-futuristic cinematic look of the Amazon series along with co-cinematographer James Hawkinson, with whom he trades off director of photography duties for each episode. It’s no small task.

The ensemble show takes place in no less than three distinct fictional locations at a time, including the Greater Nazi Reich along the eastern seaboard, the Japanese Pacific States along the west coast, and the Wild West buffer in the middle of the Neutral Zone. The show’s look also expanded internationally with characters now positioned across the alternate-history globe.

Inverse caught up with Amat to chat about how he manages to keep a cohesive vision, shooting a show with such a wide scope, and what it took to plan out the climactic event of Season 2: a huge explosion at the Japanese Kempeitai headquarters.

How did you distinguish the retro-futuristic visuals of each location?

If you cut to a scene, you should be able to know where you are at any moment. It’s also a visual statement about those worlds. There’s washed out color in San Francisco, so that world isn’t taken care of that much — the Japanese are kind of losing control. The Reich is almost black and white, so there’s a cold, unemotional contrast to everything. Then in Season 2, the present 1962 is colorful and real. The idea was to do something subtle but at the same time, make people understand.

Is that good for a cinematographer because you know what certain scenes will be like, or does that challenge you to explore new ways to show each one?

On TV you tend to fall into formulas. We shoot in Obergruppenführer Smith’s office almost every episode, for example. But we look at the script, and try to change up the light and color so we’re not doing the same thing for each episode. We reinvent locations every time.

The show is very cinematic. Do you consciously work at making it look like a film rather than TV?

There’s a very conscious effort to stay away from the visual language of regular TV. We’re constantly asking ourselves what we’d do if we were doing a movie. It’s rewarding from a cinematography standpoint because each director that comes in gets great feedback from everyone if they push the envelope as opposed to other shows where you’re supposed to deliver something that’s typical.

What kinds of cinematic references do you work with on Man in the High Castle?

We constantly renew our references every once in awhile, depending on old or new things we watch. We have a huge lookbook we developed in the first season, and it’s filled with images from our show and other things for reference. The Conformist is a big one, so is Blade Runner, and even ideas like Wong Kar-wai or David Fincher’s use of color.

We had notes from [Producer] Ridley Scott to push the visual storytelling this season. He loves the show, but he suggested bolder lighting, playing with contrasts more, and new ways to photograph certain actors, like making Joe Blake a little tougher this season by using more hard lighting.

This year, I kept talking about Schindler’s List. It’s such a beautifully shot noir look in black and white. There’s elegant but efficient camerawork in that movie. The other was Steven Soderbergh’s show The Knick that we all really like. That’s a brave period piece like our show, and they make it look so beautiful, so I borrow ideas from that all the time.

The penultimate episode in Season 2, “Detonation,” is such a tightly packed political thriller. What were your priorities when shooting the first part of the climactic Kempaitai HQ bombing?

We wanted to make the scene as real as possible. We started out with logistical concerns by asking if we could do a real explosion. But the building we shot at is really close to the freeway. The Vancouver city government was concerned about people seeing a huge fiery cloud. But they’re very production friendly, and they made it work for us. We had about 20 cameras shooting it, and what you see is 95 percent real. There’s a little bit of wire-removal here and there, but it’s a real explosion.

We did that and the set dressing of the aftermath on the same day. We knew it would be rainy and overcast so we did the explosion first thing in the morning. Then we did the rest just as it was getting dark at magic hour to make it look like the end of the world.

The interiors during that scene are a perfect example of that stark contrast you talked about but in the Pacific States. It’s almost like a throwback black and white political thriller.

We shot the interiors even darker than normal because it had to be ominous and build up to the moment of the explosion. There’s almost no color to make it gritty and uninviting.

James Hawkinson is the other cinematographer on this show. What’s that collaboration like?

While I do my episodes, he preps his episodes and vice versa. Inevitably, during prep work I could pick up a missing scene from his episode, and he did a lot of scenes for me. We basically talk and challenge each other to do better than each other, but it’s out of mutual admiration.

We like the same natural, efficient, and clean visual styles, and sometimes we reach the same conclusions. At the beginning of this season, I started playing around and used a new combination of camera filters. By his third episode, James ended up with the same ones without each of us knowing.

Where will the show go, visually, in just-announced Season 3?

I haven’t seen any scripts yet, but once that happens we’ll get ideas going. I want to explore being even more cinematic. Sometimes when we run out of time we can’t make visually interesting decisions, so I want to compensate by planning more things out beforehand to keep it interesting. More preparation wouldn’t change the way we work, but for myself it would be easier not to fall into auto mode.