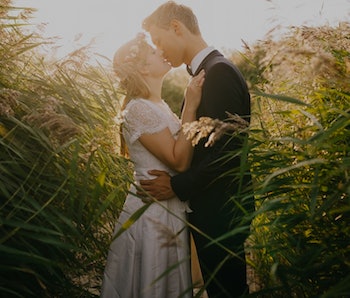 In elementary school, you learn that romance is a sequence of events: First comes love, then comes marriage, then comes the baby in the baby carriage. But the playground song is missing a key component that has remained elusive to scientists until now — a hormone called kisspeptin. It’s this peptide that functions as the intrinsic link between sex, emotion, and reproduction.

A team of scientists led by Imperial College professor Waljit Dhillo, Ph.D., announced Monday that kisspeptin was the unifying factor between these components of human behavior. In a paper published in The Journal of Clinical Investigation, they explain that it is kisspeptin that “ensures the survival of most mammalian species.” As a neuromodulator, kisspeptin links sexual and emotional brain processing, which in turn makes people want to partner up and reproduce.

“This was one of the moments as a clinical scientist when you know you have made a breakthrough which has profound implications for our understanding of human reproductive biology and may also have benefits for patients,” Dhillo told Inverse. “It’s very exciting to be a part of unraveling for the first time a new understanding of how the human body works.”

Kisspeptin was determined to be vital for reproductive functions in 2003, and previous studies demonstrated that administering kisspeptin to animals and humans stimulates reproductive hormones. The hormone and its receptors had also previously been found in the parts of the brain associated with emotion and rewards — which inspired the hunch that it may be the link between sex, emotion, and reproduction.

In their study, Dhillo and his team administered kisspeptin to 29 heterosexual young men and examined how it affected limbic brain activity and behavior using neuroimaging, together with hormonal and psychometric analyses. After dosing them with the hormone, they attempted to trigger the men’s limbic brain activity by showing them emotional images, which included photos of sexual and nonsexual couple-bonding, negative-themed images, and then neutral images. Then, they showed the participants images of happy, fearful, and neutral faces.

“These activations by kisspeptin match regions implicated in romantic love, maternal love, and even unconditional love,” the researchers write.

Dhillo previously demonstrated in 2003 that kisspeptin administration potently increased reproductive hormone release in women with infertility due to hypothalamic amenorrhea, while in 2013 he and his team found that kisspeptin administration could be effective in vitro fertilization treatment. Now, Dhillo and his team hope to leverage this new understanding of kisspeptin into the development of a drug that could alleviate reproductive disorders.

“Our current work now shows for the first time that kisspeptin has a role in linking sex, emotion, and reproduction,” says Dhillo. “As such, kisspeptin has potential promise to treat many aspects of disorders of reproductive function which cause infertility.”

More like this
Mind and Body
Sep. 18, 2022
This common mosquito-borne virus can be deadly — and researchers don’t know enough about it
By Rebecca Trout Fryxell and The Conversation
Science
Sep. 25, 2022
We’ve dumped over 15,000 pounds of trash on Mars
By Cagri Kilic and The Conversation
Science
Sep. 25, 2022
Why do cats love cardboard boxes? Pet experts decode the obsession
By Tara Yarlagadda
Share: