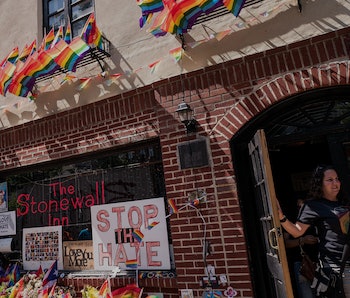 During the presidential inauguration on January 20, 2017, the White House website changed hands quickly, with pages containing President Obama’s policies disappearing without a trace. And while leaders on both sides of the political aisle praised the peaceful transition of power surrounding this divisive election, a rogue saboteur appears to be working in the background. In the hours following the inauguration, New York Times Washington Correspondent Binyamin Appelbaum noticed that the National Park Service’s Twitter account was hitting “retweet” on some pretty shady anti-Trump tweets.

Perhaps it’s a National Park Service intern who never signed out of TweetDeck. Or perhaps this is one instance of a government internet presence that survived January 20 intact. Either way, it’s pretty entertaining.

Not only is the account retweeting posts that implicitly fly in the face of the Trump administration, like this tweet about the Stonewall Inn, but also tweets that subtly shame the new President of the United States.

Appelbaum found out about the NPS’s #resistance when it retweeted one of his comparisons between 2009 and today.

Appelbaum posted these side-by-side images of Obama’s 2009 inauguration and Trump’s 2017 inauguration, pointing out how many more people showed up for the former, and whoops, yep, the NPS retweeted it. To be fair, the National Mall, where the inauguration takes place, is a national park, so the Twitter account could just be keeping the public informed as to what’s going on.

The account even retweeted a story about the new administration’s quick action to scrub the previous administration’s policies from the internet. Let’s see how long before someone from Team Trump notices what’s going on.

More like this
Culture
Sep. 15, 2022
The cults that survive even when the prophecy fails
By Peter Ward
Entertainment
Sep. 25, 2022
Knock at the Cabin trailer gets roasted online for one bizarre mistake
By Alex Welch
Entertainment
12 hours ago
Rings of Power’s best storyline steals one brilliant trick from the LOTR trilogy
By Alex Welch
Related Tags
Share: