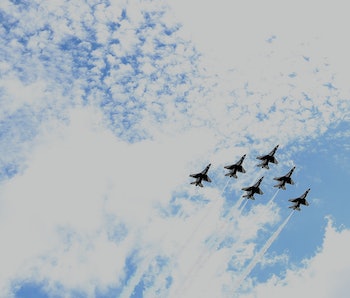 There will be five, count them, five military flyovers at Donald Trump’s inauguration, the first time military jets will fly over a presidential inauguration ceremony since Harry S. Truman in 1949.

This is pretty tamed down from the Trump transition team’s original idea for the inauguration, which included a military parade with missile launchers and tanks, according to the Huffington Post.

Unfortunately, tanks weigh over 100,000 pounds, so driving one through the streets of Washington DC is basically guaranteed to destroy whatever road you’re taking. The military told the transition team this, and also informed Trump’s advisors that it is not a good look to use heavy-duty military equipment in your parade when you’re taking office, according to the Huffington Post. Inviting comparisons to North Korea and Russian parades through the Red Square is probably not for the best.

So the team Trump settled for flyovers instead, one for each of the five branches of the military. The Air Force plans on using four different fighter jets, an F-35 (yep, the same plane Trump publicly criticized last month), an F-16, an F-22 and an F-15E. The rest of the military branches said they would use four of the same vehicles. The Navy is planning on using F/A-18 combat jets, the Army plans on UH-60 Black Hawk helicopters, the Marines will use V-22 Ospreys, and the Coast Guard will probably be in MH-65 rescue helicopters. There will be 20 pilots involved in buzzing Capitol Hill around 5:15 pm before sunset today, all of whom are using it as a training exercise.

Stephen Kerrigan, a top organizer for President Obama’s inaugurations pointed out that after September 11, airspace over Washington DC is now extremely restricted. He told the Huffington Post “If there are fighter jets flying over Washington, people are going to assume something bad is happening.” And according to the 54 percent of Americans who disapprove of Trump something bad sure is happening in D.C. today.