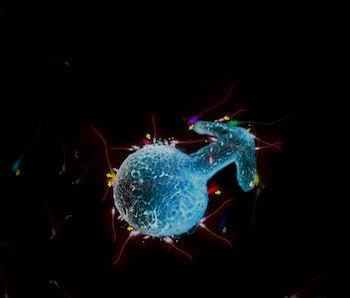 That males are naturally promiscuous while females are coy and choosy is a widely held belief. Even many scientists – including some biologists, psychologists and anthropologists – tout this notion when interviewed by the media about almost any aspect of male-female differences, including in human beings. In fact, certain human behaviors such as rape, marital infidelity and some forms of domestic abuse have been portrayed as adaptive traits that evolved because males are promiscuous while females are sexually reluctant.

These ideas, which are pervasive in Western culture, also have served as the cornerstone for the evolutionary study of sexual selection, sex differences and sex roles among animals. Only recently have some scientists – fortified with modern data – begun to question their underlying assumptions and the resulting paradigm.

It all comes down to sperm and eggs?

These simple assumptions are based, in part, on the differences in size and presumed energy cost of producing sperm versus eggs – a contrast that we biologists call anisogamy. Charles Darwin was the first to allude to anisogamy as a possible explanation for male-female differences in sexual behavior.

His brief mention was ultimately expanded by others into the idea that because males produce millions of cheap sperm, they can mate with many different females without incurring a biological cost. Conversely, females produce relatively few “expensive,” nutrient-containing eggs; they should be highly selective and mate only with one “best male.” He, of course, would provide more than enough sperm to fertilize all a female’s eggs.

In 1948, Angus Bateman – a botanist who never again published in this area – was the first to test Darwin’s predictions about sexual selection and male-female sexual behavior. He set up a series of breeding experiments using several inbred strains of fruit flies with different mutations as markers. He placed equal numbers of males and females in laboratory flasks and allowed them to mate for several days. Then he counted their adult offspring, using inherited mutation markers to infer how many individuals each fly had mated with and how much variation there was in mating success.

In 1972, theoretical biologist Robert Trivers highlighted Bateman’s work when he formulated the theory of “parental investment. He argued that sperm are so cheap (low investment) that males evolved to abandon their mate and indiscriminately seek other females for mating. Female investment is so much greater (expensive eggs) that females guardedly mate monogamously and stay behind to take care of the young.

In other words, females evolved to choose males prudently and mate with only one superior male; males evolved to mate indiscriminately with as many females as possible. Trivers believed that this pattern is true for the great majority of sexual species.

The problem is, modern data simply don’t support most of Bateman’s and Trivers’ predictions and assumptions. But that didn’t stop “Bateman’s Principle” from influencing evolutionary thought for decades.

Examining the assumptions about males

In addition, males produce semen which, in most species, contains critical bioactive compounds that presumably are very expensive to produce. As is now also well-documented, sperm production is limited and males can run out of sperm – what researchers term “sperm depletion.”

Consequently, we now know males may allocate more or less sperm to any given female, depending on her age, health or previous mated status. Such differential treatment among preferred and nonpreferred females is a form of male mate choice. In some species, males may even refuse to copulate with certain females. Indeed, male mate choice is now a particularly active field of study.

If sperm were as inexpensive and unlimited as Bateman and Trivers proposed, one would not expect sperm depletion, sperm allocation or male mate choice.

Birds have played a critical role in dispelling the myth that females evolved to mate with a single male. In the 1980s, approximately 90 percent of all songbird species were believed to be “monogamous” that is, one male and one female mated exclusively with one another and raised their young together. At present, only about 7 percent are classified as monogamous.

Modern molecular techniques that allow for paternity analysis revealed both males and females often mate and produce offspring with multiple partners. That is, they engage in what researchers call “extra-pair copulations” (EPCs) and “extra pair fertilizations (EPFs).

Because of the assumption that reluctant females mate with only one male, many scientists initially assumed promiscuous males coerced reluctant females into engaging in sexual activity outside their home territory. But behavioral observations quickly determined that females play an active role in searching for nonpair males and soliciting extra-pair copulations.

Rates of EPCs and EPFs vary greatly from species to species, but the superb fairy wren is one socially monogamous bird that provides an extreme example: 95 percent of clutches contain young sired by extra-pair males and 75 percent of young have extra-pair fathers.

This situation is not limited to birds – across the animal kingdom, females frequently mate with multiple males and produce broods with multiple fathers. In fact, Tim Birkhead, a well-known behavioral ecologist, concluded in his 2000 book “Promiscuity: An Evolutionary History of Sperm Competition,” “Generations of reproductive biologists assumed females to be sexually monogamous but it is now clear that this is wrong.”

Ironically, Bateman’s own study demonstrated the idea that female reproductive success peaks after mating with only one male is not correct. When Bateman presented his data, he did so in two different graphs; only one graph (which represented fewer experiments) led to the conclusion that female reproductive success peaks after one mating. The other graph – largely ignored in subsequent treatises – showed that the number of offspring produced by a female increases with the number of males she mates with. That finding runs directly counter to the theory there is no benefit for a “promiscuous” female.

Modern studies have demonstrated this is true in a broad range of species – females that mate with more than one male produce more young.

Seeing what society leads you to expect

So if closer observation would have disproved this promiscuous male/sexually coy female myth, in the animal world at least, why didn’t scientists see what was in front of their eyes?

Bateman’s and Trivers’ ideas had their origins in Darwin’s writings, which were greatly influenced by the cultural beliefs of the Victorian era. Victorian social attitudes and science were closely intertwined. The common belief was that males and females were radically different. Moreover, attitudes about Victorian women influenced beliefs about nonhuman females. Males were considered to be active, combative, more variable, and more evolved and complex. Females were deemed to be passive, nurturing; less variable, with arrested development equivalent to that of a child. “True women” were expected to be pure, submissive to men, sexually restrained and uninterested in sex – and this representation was also seamlessly applied to female animals.

Although these ideas may now seem quaint, most scholars of the time embraced them as scientific truths. These stereotypes of men and women survived through the 20th century and influenced research on male-female sexual differences in animal behavior.

Unconscious biases and expectations can influence the questions scientists ask and also their interpretations of data. Behavioral biologist Marcy Lawton and colleagues describe a fascinating example. In 1992, eminent male scientists studying a species of bird wrote an excellent book on the species – but were mystified by the lack of aggression in males. They did report violent and frequent clashes among females, but dismissed their importance. These scientists expected males to be combative and females to be passive – when observations failed to meet their expectations, they were unable to envision alternative possibilities, or realize the potential significance of what they were seeing.

The same likely happened with regard to sexual behavior: Many scientists saw promiscuity in males and coyness in females because that is what they expected to see and what theory – and societal attitudes told them they should see.

In fairness, prior to the advent of molecular paternity analysis, it was extremely difficult to accurately ascertain how many mates an individual actually had. Likewise, only in modern times has it been possible to accurately measure sperm counts, which led to the realization that sperm competition, sperm allocation and sperm depletion are important phenomena in nature. Thus, these modern techniques also contributed to overturning stereotypes of male and female sexual behavior that had been accepted for more than a century.

Bateman’s research has not been replicated

Besides the data summarized above, there is the question of whether Bateman’s experiments are replicable. Given that replication is an essential criterion of science, and that Bateman’s ideas became an unquestioned tenet of behavioral and evolutionary science, it is shocking that more than 50 years passed before an attempt to replicate the study was published.

Behavioral ecologist Patricia Gowaty and collaborators had found numerous methodological and statistical problems with Bateman’s experiments; when they reanalyzed his data, they were unable to support his conclusions. Subsequently, they reran Bateman’s critical experiments, using the exact same fly strains and methodology – and couldn’t replicate his results or conclusions.

More like this
Science
Jan. 29, 2023
Studying ancient human DNA has unlocked our origins — but the ethics are hazy
By Emiliano Rodríguez Mega and Knowable Magazine
Science
Jan. 29, 2023
Are coyotes dangerous to dogs and cats? Here’s how to keep your pets safe
By Tara Yarlagadda
Science
Jan. 22, 2023
Infection expert answers 7 top questions about Covid-19’s “Kraken” subvariant
By The Conversation and Sameer Elsayed
LEARN SOMETHING NEW EVERY DAY.
Related Tags
Share: