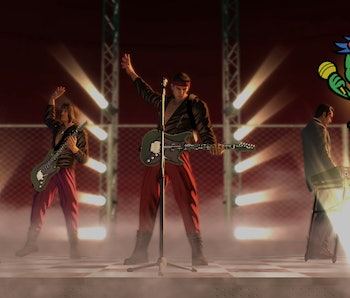 In many ways Yakuza 0 offers the perfect blend of character, combat, story, and exploration throughout its narrative. Whether you’re playing the game as Kazuma Kiryu or Goro Majima, the game continuously puts you in dangerous situations resolved by intense fisticuffs and intricate mysteries which you piece together like a puzzle over the course of the story. No matter how well you handle these challenges though, every ex-yakuza needs a few minutes to sit down and enjoy themselves which is where Yakuza 0’s excellent karaoke comes into play.

Introduced within the first few hours of the game as Kiryu and his friend Nishiki are walking about Kamurocho, karaoke is a relatively simple mini game that follows the same basic practices of Guitar Hero and Rock Band. Once you’ve found a bar with karaoke present, just head over to the machine and pick a song to get started. Some of these can be sang by Kiryu or Majima themselves, while other songs will pull a random citizen in to take over depending on the vocals required. In cases like these, you’ll be able to sing and clap along via interjections, however, which are just as hilarious as they sound.

Each button press will award you with great, good, bad, or mistake points based on your timing relative to the song, which all comes together in a final score that dictates your status on the karaoke hierarchy. Provided you perform well enough, every song you work through will fade away into a set of lines that feature Kiryu or Majima in a completely ridiculous music video that goes along with the song too, such as the rebellious leather jacket-wearing Kiryu that accompanies Shinpan’s “Judgement.”

I didn’t really expect to spend a few hours working to become a “Karaoke King” in Yakuza 0’s first bar, but I absolutely loved getting the hang of each song and working my way up the ladder to master each one available on the first album. Each sequence was clumsy at best, but boasted a side of Yakuza 0 that I wasn’t expecting — one that pulled me away from the fighting and mystery of the main story and allowed me to have a great time courtesy of a game mechanic I seemed to have forgotten about.

What’s great is that karaoke is only one, though arguably the best, of many side activities present throughout Yakuza 0’s world. While it’s true that most of the game is dedicated to telling the story that introduced Kiryu and Majima to the world of Yakuza, the game features tons of surprisingly detailed side activities scattered about the map. When you’re not beating down on some thugs, you’re encouraged to explore the various nightclubs, bars, and arcades for a bit of fun. Every location is dedicated to a specific set of activities like karaoke or playing pool, each of which bring out the weird, hilarious side of the Yakuza series that makes Yakuza 0 so great.