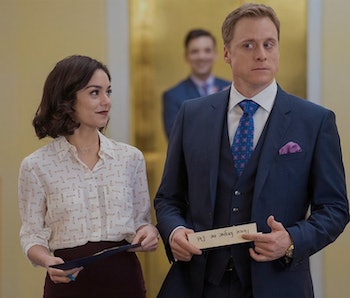 NBC’s superhero comedy Powerless is finally getting ready to premiere, but the show is a bit different from when it was first introduced. While there will be deeper ties to the DC universe, the show will hopefully maintain an independent spirit.

Since its sneak preview at Comic-Con International in 2016, there have been a lot of changes made to Powerless, NBC’s office workplace comedy. One of these changes included introducing the Wayne family name to the show, thereby tying it, tenuously, to Batman.

Alan Tudyk’s (Firefly) character was transformed from a previously unrelated character to Van Wayne, a distant cousin of Bruce Wayne. As a result of that change, the insurance company Tudyk’s first character originally ran was changed into Wayne Securities, a Wayne Enterprise subsidiary.

However, despite a closer relationship to the DC universe, Powerless showrunners maintain that they won’t be “using Batman as a crutch” to carry their show. In fact, Batman probably won’t play too big a role in Powerless despite the presence of a Wayne.

“Batman v Superman and Man of Steel are the cinematic universe, the Berlanti-verse is its own thing and Earth-P is its own thing,” Schumaker explains, referring to Geoff Johns’s DC Extended Universe, the CW’s Arrowverse, and Powerless, which occupies “Earth-P.”

“They’re not going to make appearances. They do exist in this world. We reference them all the time,” continued Schumaker, who was adamant about keeping Powerless tied to the DC Universe, but only as so far as to give the show its own superhero space to play around in.

However, he also added, “Never say never. Hopefully, we’ll live on for awhile,” suggesting that anything is possible in Powerless going forward.