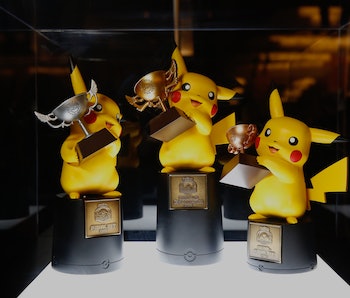 If you’re just getting into the Pokémon meta-game, you might be surprised to see that the Video Game Championships (VGC) — the officially supported annual tournament — is played only in double battles. These two-on-two matches take a lot of strategy and planning to master, and even then battles can be unpredictable. Tactics in doubles differ a great deal from singles, and you’ll need to take a unique approach when building a team. It’s not simply a matter of choosing a solid group of Pokémon and prepping their EVs and whatnot. You’ll need a plan that caters to doubles specifically, which will have a big impact on the Pokémon you select. Here’s what you need to keep in mind when selecting Pokémon for your team.

The Pokémon meta can often feel like a race, with teams fighting to get that first powerful hit in or simply setting up the battlefield to protect themselves and gain the upper hand. You’ll need at least one Pokémon with some sort of speed-manipulating ability to stay competitive. This can be anything from a move that inflicts Paralysis, like Nuzzle, to a Trick Room set up which swaps the turn order in favor of the slowest Pokémon, or Tailwind, which is a good counter for Paralysis and is easier to set up than Trick Room. We might see some people using Icy Wind to slow their enemies down, too. Alolan Ninetales is a very viable pick in this year’s VGC as a result of that.

Get Yourself a Sturdy Tank

No matter how powerful your Pokémon may be, you’ll still need a sturdy defensive type to soak up damage when the going gets tough. Wall Pokémon have special defensive moves like Protect and Wide Guard that can completely negate damage, but also have high defense stats to help them withstand powerful moves. Celesteela is the most popular wall by far in in VGC 2017, so much so that it can cause a bit of a standstill when two of them face each other. If you’re looking for something a bit different, if not slightly riskier, Toxapex is a fun option.

Include Abilities in Your Strategy

Pay attention to your Pokémon’s inherent Abilities. These special abilities kick in when the Pokémon enters the battlefield and can have a major impact on your success.

Abilities like Intimidate and Lightning Rod are getting a lot of attention this season. Intimidate lowers the Attack stat of opposing Pokémon, improving your odds of survival should you get hit. Lightning Rod directs all attacks of that type to the Pokémon with it, like Marowak (or Lightning Rod-bearing Pokémon of your choice) while boosting Special Attack.

With all of that said, don’t just pick from the Pokémon suggested above. Your team needs to be diverse, both in the types of Pokémon you choose and the movesets you create. Build up a team that can counter most threats, and give your Pokémon varied moves that can help knock out major threats if need be. There are many tools out there to keep an eye on any huge weaknesses your potential team may have. The Pokémon Team Planner is a valuable resource, as is the Showdown! Team Builder, which lets you plan your teams down to the last stat.