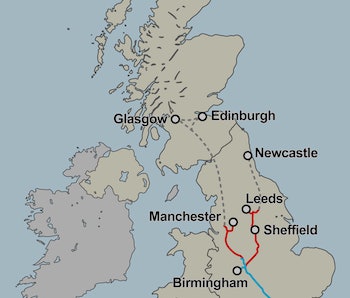 The U.K. is building a giant high speed rail line, and not everyone’s too happy. As the name implies, High Speed 2 (HS2) is the country’s second high-speed rail line, connecting London to northern England at speeds of up to 250 miles an hour. The government first announced the line would go ahead back in 2012, and the first phase to Birmingham is expected to open in 2026. Phase 2, a Y shape that connects Manchester and Leeds, will open in 2033.

It’s an ambitious project. Transport secretary Chris Graying has described the project as part of a new “Elizabethan era” for British railways, evoking the Victorian-era greats like Isambard Kingdom Brunel that oversaw bold rail projects. Unfortunately, Brunel probably wouldn’t be too pleased about HS2: his grave may get dug up in the building process.

But on Tuesday, questions arose about the project’s cost, with the Department for Transport (DfT) permanent secretary Philip Rutnam admitting that controlling costs would be “challenging.” In 2015, a spending review set aside £55.7 billion ($68.5 billion) for the new line, a slight increase from the proposed figure back in 2010 of 30 billion ($36.9 billion).

The new line is on a totally different scale to High Speed 1, which opened back in 2007. That cost £5.8 billion ($7.1 billion) and only reaches speeds of 186 miles an hour at its fastest route. The line connects St Pancras International in London with the Channel Tunnel, allowing for direct passenger services to destinations like Paris (2 hours 15 minutes) and Brussels (1 hour 55 minutes).

The problem is, High Speed 2 doesn’t have the same clear use case. London to Birmingham currently takes 1 hour 21 minutes by train, and HS2 is expected to cut that to 49 minutes. It’s fast, but it’s not exactly Hyperloop levels of speed. It’s still essentially rails on wheels: the idea to use other tech like magnetically-levitating trains has come up before, but while that would be faster, HS2 has the benefit of integrating with the existing network (so passengers can take the high-speed train direct to Scotland).

So why is the government pushing ahead? Because it’s concerned that key sections of the rail network will basically hit peak capacity by 2024. Big train projects are cool, but HS2 will probably see the light of day out of necessity rather than because of some romantic dream of rediscovering Britain’s love for the railway. It may cost a lot, and it might cause Brunel to roll in his grave, but if it doesn’t get built, it could send the whole network into disarray.