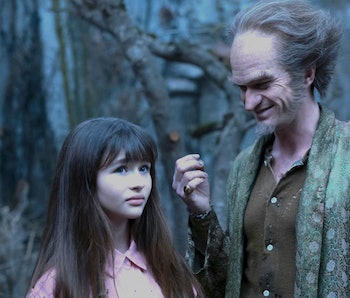 Over the weekend Netflix reaffirmed what readers of Lemony Snicket’s books have known for almost a decade: Stories for kids don’t have to be boring or predictable. While the vast majority of family-oriented children’s stories adhere to well-worn hero’s journey cliché, Netflix’s A Series of Unfortunate Events feels brand new even though its source material isn’t. The Netflix series, like the novels, makes the brave assumption that children are human beings capable of complex thoughts and that they crave complex stories, which should dare to go dark.

When the “real” Lemony Snicket (Daniel Handler) spoke to Inverse last week, he said he believed “dark” was a “comparative term,” meaning A Series of Unfortunate Events is only considered “dark” because most stories for kids are so often superficially much brighter. Handler was doubling down on a point he made all the way the back in 2002 when The Unauthorized Biography of Lemony Snicket came packaged with a reversible dust jack, allowing the reader to disguise the book as a faux-children’s series called “The Luckiest Kids in the World: The Pony Party.” Here, what Snicket/Handler thought of a certain variety of children’s story was made clear: Overly bright and cheery kid’s stories are pretty dumb, a superficial happy face slapped over the difficult things children process every day.

The Snicket stories, on the other hand, assume kids are intelligent and understand more than adults would like to admit. A target audience from ages eight to 12 can, in fact, handle a scene in which Count Olaf slaps Klaus across the face. In order to understand that Olaf is evil, Olaf should do evil stuff. But more importantly, that young audience is encouraged to try and understand the wickedness of the world rather than shy away, or take shelter, from it. All three orphans are able to thwart Count Olaf’s schemes time and time again, mostly because they acknowledge how terrible he is rather than hide from it. Basically, the Baudelaires don’t “look away” as many adults advise children to do when things get too scary. Instead, they focus on the bad stuff and draw strength from it. If this were Star Wars, the Baudelaires would be like Jedi Knights who treat the Dark side as a fact of life.

But it’s not all gloom and doom, though, because the way Daniel Handler’s scripts cut through this obsession with darkness is with humor. When events, do in fact, get far too unfortunate, at least the Baudelaire children — and the audience — get a laugh. The combination of relative darkness with slightly surreal circumstances and charming aesthetic creates humor. This above all else is why these stories are so popular. Macabre storytelling for kids is obviously a little subversive, but successful ironic humor requires intelligence. Making something for children isn’t about protecting them from the bad, it’s about giving them a way to get through it, which often means laughing through the pain.

Of course, there are other children’s properties that don’t shy away from darkness. There’s Harry Potter for instance. A cursory glance of death in all the Harry Potter stories might lead someone to conclude it is in fact “darker” than A Series of Unfortunate Events because its fantasy elements are less cartoonish and more “realistic.” But, the way in which death and tragedy strike Klaus, Violet, and Sunny is much closer to how children experience death in real life. Their entire journey is a series of drastic scene changes, a constant cycle of being uprooted and abandoned. Compare that to the relative safety of a boarding school with a wise, old father figure to guide it, and it’s clear that the Baudelaries are facing the more realistic consequences of death: They are at the mercy of a world in which they have little say that adults are actually willing to hear. The Baudelaires triumph over the unpredictable nature of life in spite of the fact that they are children, instead of the notion they survive because they are “Chosen” like the titular Boy Who Lived of Harry Potter.

In J.K. Rowling’s fantasy universe, events are doggedly tied to explanations and justifications for just about everything. But Unfortunate Events rejects this notion of orderly fantasy and instead revels in chaos, which is a more accurate reflection of how the real world feels to child. “The world is unreliable from start to finish,” Daniel Handler said, and that is what makes the new Netflix show more accessible than other episodic fantasy, including several shows supposedly for adults. Because A Series of Unfortunate Events mocks the earnest seriousness of heroic children’s stories or fables, it also tugs at the strings of deadly serious adult programming, too.

Spoiler alert: Not even half of your questions about A Series of Unfortunate Events will be answered in future seasons, because that’s not the point of these unfortunate events. Good storytelling is the point even as television isn’t limited to dot-connecting season-long arcs.

A Series of Unfortunate Events is not Westworld for youngsters, because it’s way too intelligent to be so one-note. Instead, it presents a mode of darkly humorous narrative art often forgotten in our binge-obsessed culture. The children in the series — and the children who are its fans — tire of dull stories full of obvious heroes, because heroes do nothing but lie to children about how the world actually is. The Baudelaires, on the other hand, know that in order to survive this tricky life, sometimes you have to “do the scary thing first, and get scared later.” The series has endured through both decades and mediums, with one simple trick: assuming its intended audience is smart enough keep up. If only other TV shows were as honest.

More like this
Entertainment
Jan. 18, 2023
Everything you need to know about That ‘90s Show on Netflix
By Claire Fox
Entertainment
Jan. 13, 2023
Foundation Season 2 could fix the worst thing about the Isaac Asimov books
By Ryan Britt
Culture
Jan. 25, 2023
30 years later, Star Trek is about to pay off a massive villain comeback
By Ryan Britt
LEARN SOMETHING NEW EVERY DAY.
Related Tags
Share: