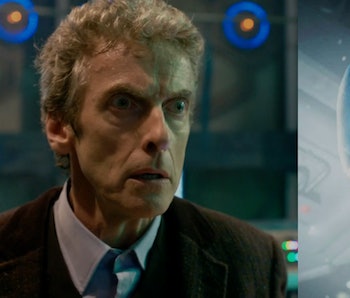 Bill’s killer Star Wars references and sci-fi movie one-liners will go unnoticed by the Doctor in Season 10 of Doctor Who. If anything, the Time Lord will be totally confused when Bill takes it upon herself to slip in another Alien joke while traveling through time and space.

Doctor Who veteran writer Mark Gatiss told Doctor Who Magazine that the 12th Doctor still isn’t up to date on Earth’s science fiction, despite his being a walking, talking sci-fi tale himself. Luckily or, perhaps, to his annoyance, Peter Capaldi’s Doctor will have Bill (Pearl Mackie) in the upcoming Season 10 to help him out with those tricky references.

When speaking of the episode Gatiss will be writing for Season 10 (his ninth time writing an episode for the series), he said:

… with the new companion, Pearl [Mackie], [showrunner] Steven [Moffat] said, “You can’t pretend that people aren’t aware of sci-fi,” so she’s actually saying things like, “Is it like that bit in that film?” … In my new one, I’ve got a running joke about these films, because the Doctor doesn’t know what she’s talking about, because he doesn’t watch sci-fi films. He’s going, “Is that the one where the little girl goes to see the wizard?” “No!”

Considering that the Doctor is a bit of a Wizard of Oz himself (albeit, much more legitimate), it makes sense that he’d get science fiction mixed up. He’s seen a lot, and the entertainment and weirdness factors of his life are far superior to anything Earth’s creatives could come up with. The Doctor has proven that he has far more important things to do than pay attention to what alien races Ridley Scott and Steven Spielberg are offending.

Season 10’s so-called “soft reboot” will be centered around Mackie’s charming Bill, who will undoubtedly bring new life (and solid sci-fi references) in her wake.