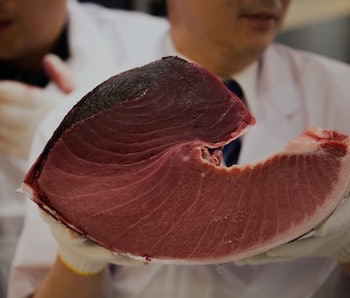 How much did you pay for that slice of halibut sashimi? What about those two pieces of red snapper? According to a study published in the journal Conservation Biology on Friday, you likely paid too much. This may be frustrating news for sushi lovers, but it’s good news for flounder lovers: Any time you’ve been served halibut in a sushi restaurant, rest assured that you probably ate flounder. But the problem is much broader than just this one substitution. Demian Willette, of the Department of Ecology and Evolutionary Biology at the University of California Los Angeles, and his colleagues found that 47 percent of the samples they collected were mislabeled. That means your odds of getting the sushi you ordered are slightly better than a coin toss.

If you think this is an issue associated with lower-tier sushi joints, think again. Willette and his colleagues had their undergraduate students gather samples over four years from 26 sushi restaurants that were rated highly by customers on Zagat and Yelp in the greater Los Angeles area. They used a genetic testing technique called DNA barcoding, in which particular portions of DNA can be used to identify an individual as part of a species, to verify the identities of the samples. All of the restaurants had at least one incident of mislabeling during the four-year period, with an average mislabeling rate of 45.5 percent.

Researchers say this high rate of mislabeling indicates that there are problems all along the supply chain, from the fishing boat to your plate and all points in between. “The fact that every single one of our restaurants had a case of misidentification means it’s systemic,” Willette tells Inverse. “There are problems deep in the supply chain.” This is an issue that affects not only fish eaters, but conservation officials who depend on proper record-keeping procedures to accurately manage fisheries.

Some fish were not mislabeled very often. Salmon, for instance, was only mislabeled 13 percent of the time. Willette isn’t sure why it was mislabeled less often than most other fish. But he points to bluefin tuna, the only fish that the researchers found to be properly identified 100 percent of the time, as evidence that fish can indeed be tracked accurately from the ocean all the way to your plate.

Douglas McCauley of the Department Ecology, Evolution, and Marine Biology at the University of California Santa Barbara, who was not involved in the research, agrees that the problems of seafood misidentification lie all along the supply chain. “The fact that they sampled the same restaurants repeatedly over four years emphasized that it’s also a persistent problem,” McCauley tells Inverse. “This problem won’t go away without some big changes.”

Fortunately, some changes on the horizon may improve the situation. Willette says that a new seafood import monitoring program by the National Oceanic and Atmospheric Administration will require imported fish to be tracked from where they’re caught until they reach the United States border. He tells Inverse he would like to keep sampling restaurants once this rule goes into effect. “It’ll be interesting to see if we get a drop in these numbers.”