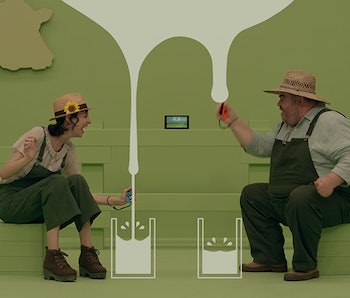 Nintendo threw a slew of Switch news at us over the past few hours, including the reveal of a new game, 1, 2, Switch. The game was demoed in a lighthearted teaser trailer, showing folks challenging each other to duels, playing tennis, and other assorted cooperative mini-game silliness that took advantage of the motion technology in the new system’s controllers.

In what looks to be the next evolution of Wii Sports, this new iteration takes the fun offscreen, as you face off against friends solely using the Switch’s Joy-Con controllers. It promises to be delightfully ridiculous, as you perform copy-cat dance-offs and cow-milking races. We doubt we’ll be able to look at our friends with a straight face while playing this game.

1, 2, Switch requires just one set of Joy-Con controllers — each player takes one half — meaning players can enjoy it from day one without investing in extra peripherals. The game will make good use of all of the controllers features, too, with some games using the Joy-Con cameras and motion controls.

While Wii Sports was pretty much exactly what the title suggested (sports, on the Wii), 1, 2, Switch looks to be a blend of athletics and goofy Wario Ware-esque mini-games. There’s the aforementioned cow-milking, but then you’ve also got samurai sword-fighting, what looks to be sandwich eating contests, and other assorted ridiculousness. Above all, it looks like it’s been designed to be easy to pick up an play — perhaps an appeal towards the so-called “casual” gamers that helped make the Wii such a success.

We’ll find out if it’s the next Nintendo party hit when 1, 2, Switch launches on March 3 alongside the Nintendo Switch console.

More like this
Gaming
6.28.2022 6:22 PM
10 intriguing Switch game reveals from the Nintendo Direct Mini
By Robin Bea
Gaming
13 hours ago
15 years later, the smartest shooter ever made still holds up
By Joseph Yaden
Gaming
6.30.2022 5:06 PM
Everything you need to know about the hyped Metroid Prime remaster
By Joseph Yaden
Related Tags
Share: