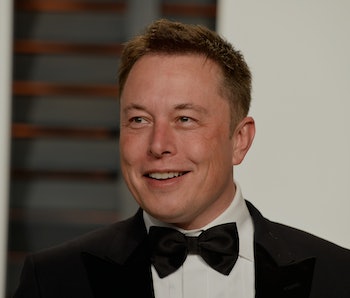 Elon Musk loves, loves fast cars. In 1999, when he was a precious, slightly balding new millionaire, Musk bought a brand new McLaren F1, which at the time was the fastest car in the world. A couple years later, he took it for a wild joyride with his friend and business partner Peter Thiel, drove it over a hill, and totaled it.

The story has been floating around the internet for years, but got brought up again thanks to Thiel’s recent profile in the New York Times. Here it is, as told to columnist Maureen Dowd:

[Thiel] recalls a story from his and Mr. Musk’s PayPal days, when Mr. Musk joined the engineering team’s poker game and bet everything on every hand, admitting only afterward that it was his first time playing poker. Then there was the time they were driving in Mr. Musk’s McLaren F1 car, “the fastest car in the world.” It hit an embankment, achieved liftoff, made a 360-degree horizontal turn, crashed and was destroyed.

“It was a miracle neither of us were hurt,” Mr. Thiel says. “I wasn’t wearing a seatbelt, which is not advisable. Elon’s first comment was, ‘Wow, Peter, that was really intense.’ And then it was: ‘You know, I had read all these stories about people who made money and bought sports cars and crashed them. But I knew it would never happen to me, so I didn’t get any insurance.’ And then we hitchhiked the rest of the way to the meeting.”

There are a few important takeaways from this. One, as we knew, Musk is weirdly calm in most situations of extreme stress and emotion, and it’s easy to picture him saying “that was really intense,” in his weird sorta-South-African accent. Two, Peter Thiel is exactly the kind of baby-headed jockstrap who would refuse to wear a seatbelt in a sports car (even though he’s obsessed with becoming immortal through weird blood transplants and organ donation startups). Three, of course young cocky Elon didn’t have insurance — but since he’s blown up a lot of stuff in his career, we’re pretty sure he didn’t make that same mistake twice.

Here’s Musk telling his side of the story in an interview in 2012.

Fortunately for everyone involved, there’s also documentary footage of a young, awkward, poorly-dressed Musk receiving the McLaren in 1999. Check it out.

For reference, here’s what a McLaren F1 looks like when it’s not totaled in a ditch somewhere.

So far, Musk hasn’t wrecked any Teslas (that we know of), so maybe he learned his lesson.

More like this
Innovation
2 hours ago
Why Elon Musk's robot dreams may be a step too far for Tesla
By Liane Yvkoff
Innovation
Sep. 20, 2022
SpaceX Starship orbital flight: Elon Musk's giant rocket just passed another critical test
By Mike Brown and Molly Glick
Innovation
Oct. 2, 2022
EV ownership has a racial gap — one major change could bridge the divide
By Andrea Marpillero-Colomina and The Conversation
Related Tags
Share: