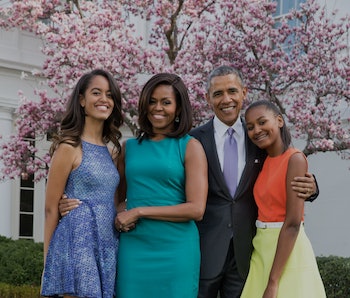 Sunny Obama, a prized and valuable member of the Obama family, went in for a chomp instead of kiss on a guest’s face at the White House earlier this week — much against its Portuguese water dog heritage.

TMZ reports that the guest was an 18-year-old girl who apparently wanted to land a selfie-worthy smooch, ending up instead with a bloody gash in her cheek. Doctors say she will need stitches and will most likely end up with a scar.

This is more than just your average dog-eat-girl scenario, and not just because of Sunny’s co-status as First Dog: Portuguese water dogs like Sunny are notoriously docile. A 2008 study from the journal Applied Animal Behaviour Science studied the differences in breed aggression across dozens of dog breeds, finding that regardless of scenario, these dogs do not nip: Whether it comes to aggression with strangers, other dogs, or even rivalry dogs, Portuguese water dogs score next to nothing in aggression levels compared to most breeds.

Which makes Sunny’s nip a bit of a freak occurrence. But all dogs, no matter how sweet and cuddly, feel threatened when humans get close to their face … especially strangers who don’t do the sniff test.

Kneeling down to a dog’s level and allowing them to smell and see you is rule number one in being friends with a pooch. Failing to do this and putting a strange face too close comes across as a threat and an invasion of precious personal space. Dogs may get afraid or anxious and, at this point, any reaction is possible. It’s simple fight or flight for any animal — which means Sunny might have just been scared.