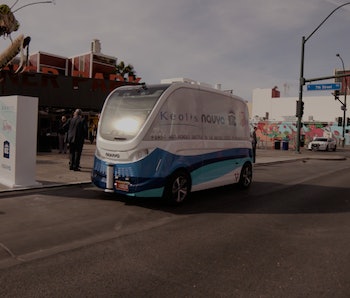 Next time you take a trip to Vegas, you might find yourself driven around by an A.I.-powered robot bus. Shuttle manufacturer Navya, in partnership with Keolis, has launched the U.S.’s first autonomous public transit vehicle. The Arma, which can hold up to 12 passengers, will run for a week-long pilot around the city’s innovation district, offering free rides along east Fremont Street.

“The city of Las Vegas is making major investments to improve motorist mobility and safety, provide reliable transportation choices and showcase technology in downtown Las Vegas, and we are thrilled Keolis is taking us a step in that direction,” mayor Carolyn Goodman said in a statement published Tuesday.

It’s not the first time the Arma has hit the road, with 30 of the vehicles in use in seven countries (including the U.S.) around the world. Navya first publicly demonstrated the Arma in the U.S. at the 2017 Consumer Electronics Show, so it’s fitting that the Arma returned to the same city later that month.

The technology has the potential to revolutionize public transport. In his second master plan, Tesla CEO Elon Musk suggested that self-driving shuttle buses could pick up passengers from their exact location, using a smartphone app to track them with GPS location. The Arma might only work down a specific street in Las Vegas, but it has great future potential to change how people move around a city.

More like this
Gear
Jan. 13, 2023
Hyundai’s crab walking tech will make parallel parking a thing of the past
By Jackson Chen
Innovation
Jan. 16, 2023
In a wild first, physicists used lasers to control lightning on a mountaintop
By Max G. Levy
Gear
Jan. 27, 2023
Audi’s EV concept uses mixed reality to make your adventures easier
By Jackson Chen
LEARN SOMETHING NEW EVERY DAY.
Share: