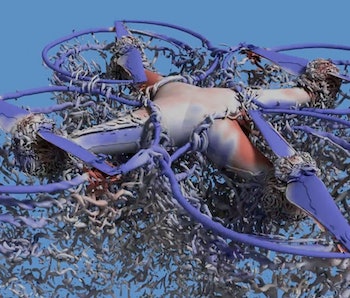 NASA has a new way to study the drone aerodynamics as a way to create more thrust, and the computer simulations are pretty cool.

To test designs and improve performance of next-generation vehicles, NASA has been using computer models to simulate the airflow aircrafts, and recently, researchers at the Ames Research Center in Silicon Valley have taken to using the same technique for modeling a modified DJI Phantom 3 quadcopter.

The Phantom has four whirring rotors that generate enough thrust to lift anything it’s carrying (often a video camera) into the air. The computer simulations show how air moves around the drone and interacts with the rotors and X-shaped frame during flight.

Researchers used this model to study how adding more rotors will affect the drone’s performance. When they added four more rotors to the drone, the thrust nearly doubled.

There’s a worthy scientific goal for this research, though. It can offer insight on designing autonomous multi-rotor vehicles that can fly and lift heavy objects. These types of vehicles can potentially be used for cargo transportation.

Besides lifting cargo, drones also need to overcome the problem of crashes and to steer clear of collisions like trees, buildings, and other drones. So far, Amazon, Google, and Walmart have plans to use drones for delivery. In fact, Amazon made its first drone delivery in England last month — and it only took 13 minutes for the customer to get the package.

NASA has also conducted additional research on drones. Researchers from NASA and Stanford have partnered together to build an air traffic management system, which keeps drones from running into each other. In the past year, NASA also used drones to hunt down El Niño storms and to detect methane over gas pipelines.

See the full video below.