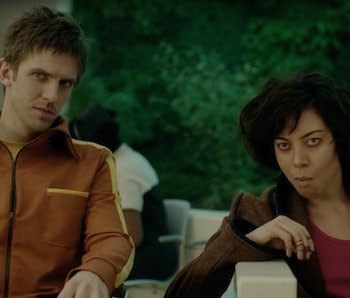 FX’s Legion has plenty of people talking about its unique approach to the X-Men universe, but whether or not the show will crossover with the established X-Men films is still up in the air, according to showrunner Noah Hawley (Fargo).

In an interview with Entertainment Weekly about Legion’s connection to Fox’s X-Men film universe, Hawley revealed that he is a “firm believer the show has to stand on its own two feet. For a crossover to be possible we have to earn that right through the quality of our storytelling and hopefully our popularity.”

What that means is that Hawley has essentially revealed that the show will try to do something similar to Deadpool and not rely on big name mutants like Professor X, Wolverine, and Magneto to get people’s interest. Rather, Legion will try and hook audiences with the show’s own line-up of characters.

However, like Deadpool, that’s probably not the whole truth.

Hawley explains that Legion will keep the fact that David’s father is Professor X, canon. “David’s origin story hasn’t changed, so we haven’t changed that connection to the X-Men universe.”

With X-Men director Bryan Singer serving as an executive producer on the show, Hawley could be referring to the bigger X-Men universe, meaning there’s room to maneuver a Professor X cameo into Legion if necessary (or successful). Even Deadpool’s reluctant use of big X-Men stars stemmed partially from the film’s low budget, a fact directly referenced in the film.

If Legion proves to be a critical and commercial success like Deadpool, there’s a chance that Fox will open up the larger X-Men universe to Legion, that is if Legion is even interested in exploring that universe in the first place.